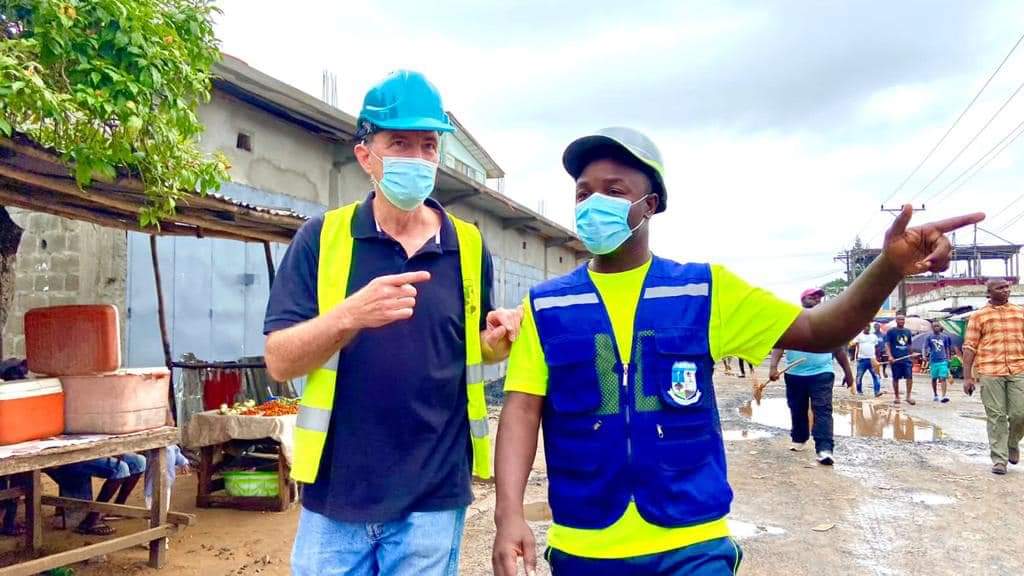 “Mayor Koijee and I both know that actions speak louder than words, and when it comes to keeping the city clean, everyone needs to pitch in.” This is what Joel Maybury, the Deputy Chief of Mission for the United States of America in Liberia, said. This past weekend, he and other volunteers from a cleanup campaign worked to clean up a neighborhood in Monrovia to show that the saying “actions speak louder than words” is true.

The lathering of dirt on the streets of Monrovia, Liberia’s capital, is a defacing public problem that can only be addressed collectively. Over the years, both Liberians and foreign diplomats have communicated their concerns in various ways. Some have openly criticized the national government for failing to implement a proper strategy and method to maintain Monrovia clean, while others have joined cleaning activities.

Mr. Joel Maybury, the United States of America’s Deputy Chief of Mission (DCM), is one such noteworthy individual that participated in a cleaning up drive in Monrovia over the weekend.

On Saturday, May 21, 2022, Monrovia City Mayor Jefferson Tamba Koijee led a large clean-up drive in neighborhoods in Monrovia. Joel Maybury, a huge Whiteman, a diplomat dressed appropriately for the occasion—blue jeans, blue Calla T-shirt, light-blue helmet, and lemon-green luminous safety jacket—was among the campaigners. He held a locally produced yard-broom made of raw materials purchased from the local market.

But Joel was unconcerned. He swept in a backyard garden while people looked on in disbelief at the sight of a white man sweeping in their backyard. Mayor Koijee can only hope that the presence of an American white man in a cleaning effort will convey a clearer and stronger message to Monrovia people to join ranks in a collaborative action to clean up their areas.

Womenvoices Newspaper publisher Helen Nah Sammie interviewed America’s Deputy Chief of Mission in Liberia to learn more about his motives. In response, the US diplomat stated that it is critical for everyone to participate in keeping their communities clean, something he has done frequently back home in the United States of America. He frequently joins other volunteers to clean parks, streams, and beaches in the United States, he said, arguing that both he and Mayor Koijee understand that actions speak louder than words, and that everyone must pitch in to keep the city clean. Furthermore, the American diplomat stated that he values the opportunity to meet with people in order to listen to them, study what they’re trying to accomplish, and, in this case, join forces with them.

Womenvoices: Hi DCM, the move you took today to join Major Koijee in a cleaning up campaign was quite amazing and we were impressed. What motivated you to do so?

DCM (Joel Maybury): First of all, I think that it’s important for people to take part in keeping their communities clean. In the United States, I have often joined other volunteers to clean parks, streams, and beaches. Second, Mayor Koijee and I both know that actions speak louder than words, and when it comes to keeping the city clean, everyone needs to pitch in. Finally, I appreciate opportunities to get out among people to listen to them, observe what they’re trying to accomplish, and in this case, join forces with them.

This is second in recent time for a high-profile foreign diplomat to join Mayor Koijee in a massive cleaning up campaign in Monrovia. The Head of the European Union Delegation to Liberia, Ambassador Laurent Delahousse, a few months back was seen with the City Mayor in street corners of Monrovia trying to clean up.

However, it can be recalled that the United States Ambassador to Liberia, Michael McCarthy, and Amb. Laurent Delahousse of European Union, on separate occasions, expressly frowned at public behavior of lathering of dirt on the streets on Monrovia. In an open statement, Ambassador Delahousse, who later apologized, said Monrovia was the dirtiest city he had ever visited in Africa. His statement was so heavily amplified on social media and in the local paper that he felt compelled to apologize, stating that he was misconstrued.

On similar note, Ambassador McCarthy said when was Peace Corps volunteer, he was blessed to live for two years in villages (without electricity or running water) in West Africa. He said the first thing every morning, each household would take advantage of the cool, early morning daylight to sweep inside and outside and dispose of debris. Comparing residents of Monrovia with villagers, he said villagers then coordinated with the local government to deliver waste daily to a designated landfill.

He said the state of cleanliness in the city of Monrovia, which is more developed and a far wealthier community, sadly does not compare.

Perhaps, keeping the streets of Monrovia clean has become a challenge principally for two reasons that include social and capacity issues. Some observers believe that public education to get the involvement of the general citizens is an absolute necessity, while others believe that the need to enhance both human and material resource capacities in the governance structure of City Corporation was imperative.

“Prepare your families for Lockdown”