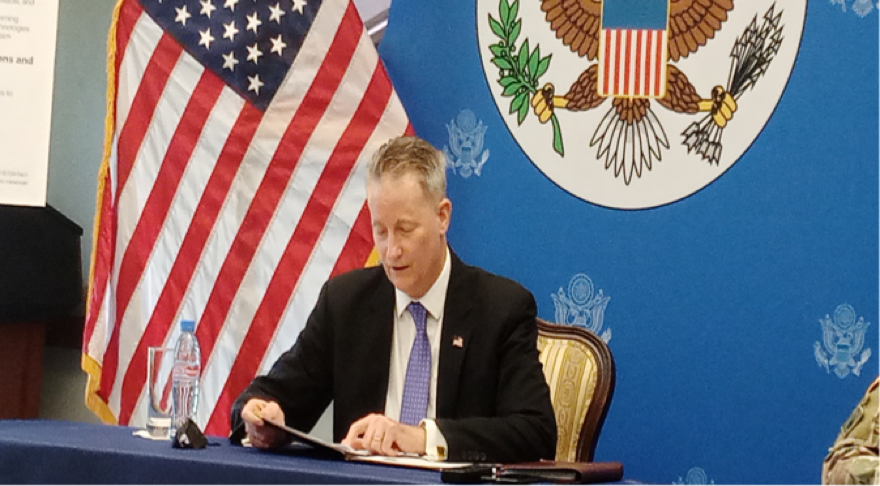 The United States Ambassador to Liberia, Michael A. McCarthy, has given the Liberian people his word that their anti-corruption efforts will continue in full force even though the United States is not going to announce any new sanctions at this time.

As a result of the Global Magnitsky sanctions that were placed on three Liberian officials in August, Ambassador McCarthy stated that the United States government is able to and will continue to use sanctions as necessary on an ongoing basis in order to support their mutual development, democracy, and security goals. These sanctions will be guided by the United States Strategy on Combating Corruption.

On Thursday, December 8, 2022, in observance of this year’s International Anti-Corruption Day, the U.S. Ambassador made the comments in an open letter. The letter was published as part of the celebrations.

In his open letter, Ambassador McCarthy stated that the all-important goal of transparent, free, credible, and peaceful elections in October 2023 will be an important factor in decisions about additional sanctions in the months leading up to the vote.

Nine months ago, I posed the intentionally provocative question, “What would J.J. Roberts have to say about Liberia today?” in reference to the country’s current political climate, which contributed to the beginning of a conversation about the current state of affairs in this country 175 years after it gained its independence and 200 years after the first American settlers arrived. “Now on December 9, International Anti-Corruption Day, and at the close of the bicentennial year, I believe it may be helpful for Liberians to take another honest look in the mirror,” he said.

He emphasized that in the end, “due process” or an accused person’s “day in court” can only occur in accordance with Liberian law, in courts located within Liberia.

He added that the Liberians generally agree with their assessment that corruption is the primary cause of Liberia’s failure to thrive; the majority of people in the international community share that assessment, which is why the United States Department of the Treasury took the extraordinary step of sanctioning five senior Liberian officials in only three years under the Global Magnitsky set of sanctions. This has led to some positive results, including the resignation of the three most recently sanctioned officials, who were sanctioned under the Global Magnitsky set of sanctions

“In our announcements regarding the Global Magnitsky Sanctions, the Government of the United States has used language that is unusually harsh regarding the corruption of these individuals,”

Liberians have, on occasion, also heard responses from sanctioned officials in their own right “he made the claim.

He maintained that sanctions can be helpful, but the most important tool for holding officials accountable is the vote in a democratic election. If the people of Liberia make the decision to elect or re-elect sanctioned officials to their leadership positions, it will send a very clear signal about how they truly feel about the fight against corruption and the future of their country.

He made the observation that corruption is not a problem that is exclusive to Liberia but rather a global issue, and that it is a problem that exists in the United States at all levels of governance. As a result, on this day, which is designated as International Anti-Corruption Day, it is important to think about what additional steps Liberians can take to combat this problem.