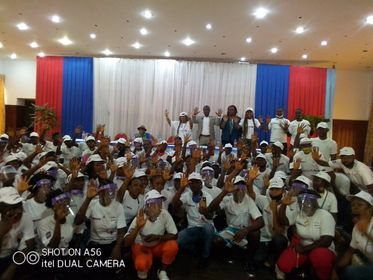 The program which lasted for three months, was officially closed on November 11, 2020 in Monrovia.

Ninety disadvantaged youths from diverse slum communities in the rural and urban parts of Liberia participated, and were capacitated on entrepreneurship, peace building.

The participants were also trained in youth resilience to organized crime and gang violence.

Speaking during the closing program, the Establishment Coordinator of ABIC, Cllr. Yvette Chesson-Wureh thanked the participants for their courage to step outside of what she called their disadvantaged state to do more for themselves and their society.

Cllr. Chesson-Wureh expressed joy over the disadvantaged youth participation in the program, saying, “though they were in said state of their life, they believe in the power that dwells within them by walking outside of their bad life, and accepting that they are responsible for the well-being of their life and choosing the path of mental and physical peace.”

The ABIC Establishment Coordinator admonished the participants to make use of the training they have acquired from the program, and help build up their peers and the younger ones on a peace building mind.

‘’The sustainability of our country’s peace is everyone’s initiative to work on, and thank God that you have believed in the power that dwells within you by stepping up for your own peace and your surroundings, therefore, make adequate use of all you’ve learned from this training and help build others,” she said.

For his part, Monrovia City Mayor, Jefferson Koijee thanked ABIC for the initiative, saying though those young people chose the dark side of life but, ABIC has given them the transformation that they need to build a better life for themselves and their families.

He thanked the participants for their willingness to join, as he called on other disadvantaged youth to do same, pledging his full commitment and support in the forward-match of the initiative for greater participation.

Speaking also at the closing ceremony, the Board Chair of ABIC, Former Foreign Affairs Minister, Olubanke King-Akerele called on the participants to stand for peace in their various communities by refusing to allow themselves to be used negatively.

She encouraged the 90 participants to show the world what they have been made of by changing the mind-set of their colleagues, the world at large and improving themselves on what they have received from ABIC.

The participants who were received certificates of achievement, lauded ABIC for the training, asserting that they have now realized that there are skills within them that have buried the bad lifestyles they once led.

They vowed to improve themselves on all that they have learned, and to share the peace they now enjoyed with their peers and the society,