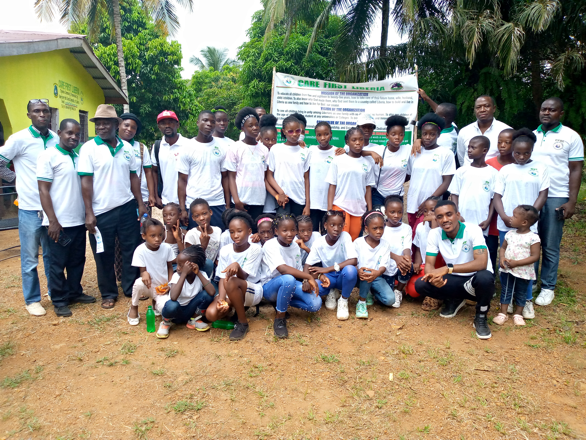 Care First Liberia, a local organization, has opened a new front of engagement with citizens when it officially launched an anti-drug sensitization and awareness campaign targeting the young populace.

The program took place Saturday, December 17, 2022, in Pipeline Community, Paynesville, District #3, Montserrado County. The launch brought together stakeholders of the community, including elders, community leaders, and heads of religious and student groups, among others.

Young people who abuse substances often experience an array of problems, including academic difficulties, health-related problems, poor peer relationships, and involvement with crimes, which creates consequences for family members, the community, and the entire society.

Giving an overview of the program, Gifty G.V. Dahn, founder and CEO of Care First Liberia, said her organization was intensifying its campaign against drug and substance abuse with a focus on children to know their role and responsibility and draw a line between them and those who are already victims.

Madam Dahn recounted the devastating impact of illicit drugs on Liberian society, particularly the young generation, as she used the occasion to call on parents, guardians, and stakeholders to join the fight against drug abuse and the use of drugs and other harmful substances that are increasingly affecting young Liberians.

“It is my passion to work with young people, and I believe that they are the future leaders of the country.” To see them going in a direction that is not good for their lives and society as a whole, we thought it important to provide the requisite awareness that they have a role and responsibility to play in the progress of the future.

“Since two years now, we have been working on this initiative, which aims to make young people productive. We believe it is critical to draw a distinction between at-home children and disadvantaged youth, or zogos, while working to reintegrate victims into society. “We want to ensure that those who are home remain and are saved,” she added.

Commenting more on her organization’s activity, CEO Dahn disclosed that forty youth are currently being trained by Care First Liberia in Barclay Mission and Lomax communities to be ambassadors of change. Also, she mentioned that her organization has administrators in Bong and Nimba counties.

Bishop Albert David Miller, who delivered the keynote address and officially launched the program, expressed concern that drug and substance abuse has a devastating effect on the young generation, endangering the country’s future.

Speaking on the topic “Effect of Substance Abuse on Young People,” he lamented the widespread abuse of drugs by many young people and how such a situation is turning a significant portion of the population, mainly youth, into “zogoes,” or wayward.

The National Overseer of the Universal Church of Christ emphasized the importance of dealing with the serious problem of drug abuse by calling on religious and community leaders, as well as school administrators, to make it a priority to be able to help the children avoid the use of what he termed “dangerous substances.”

Bishop Miller used the occasion to call on the government of Liberia to do more to solve the growing challenge.

I am panicked by the increasing number of disadvantaged youth in every nook and cranny of this country; some are even involved with crimes and prostitution. This is concerning, and it should pique the interest of all well-meaning Liberians who want to see long-term peace and progress in the country, according to the clergyman.