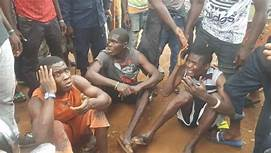 …Made Away With Money, Other Valuable Items

A gang of unidentified criminals, brandishing deadly weapons, early Thursday, October 22, 2020, raided the Rehab Community in Jacob Town, Paynesville, outside Monrovia, and subsequently made away with several valuable items and money belonging to several residents of the community.

Speaking to the Women Voices over the weekend, one of the victims of the latest criminal attack, Ms. Bernice Bayoh, disclosed that while she and her son were asleep, the marauding criminal gang, at about 2 A. M. on Thursday broke into her bed room, and made away with some of her personal belongings including a television set, school fees, among others after effectively terrorizing and threatening her with rape or death.

Ms. Bayoh who is a student of the United Methodist University on Ashmud Street in Central Monrovia disclosed that the criminals were fully armed with deadly weapons including knives, a gun, broken bottles and other dangerous instruments.

“One of the criminals stood over me with the gun saying that if you refuse to show us the money, we will rape or harm,” she narrated in a sad mood.

“And so I showed them (criminals)   the place that I was keeping my school fees, and they took it along with my television and other belongs “she emphasized.

She quoted one of the attackers as saying to her, “we are aware that you are a money person” or financially stable person in the Rehab Community.

“I told them that I am striving to make life, I am not a money woman but they harshly responded that I was lying to them.

“One of them pointed a gun to my head in the room as I pleaded with them not to harm us,” she added.

“I am very grateful to God for his protection that the criminals did not harm me or rape me,” she further indicated.

The victim further pointed out that in recent times the rate of criminal activities in the community has been on the increase and appealed to the Liberia National Police (LNP), to regularly patrol the Paynesville Community, especially during nights hours.

“I am not sure that I will be in school for the coming semester, where will I get money to pay my school fees, only God I am looking up to for his intervention in my situation, ” Madam Bayoh said.

She said if the LNP begins to carry out regular night patrols in Paynesville and its environs, the security situation there would be significantly improved.

She said, at the moment, the Rehab Community needs to be regularly patrolled by the LNP, especially during the night hours, for protection of community residents.

Also narrating her ordeal, Madam Cecelia David, a business woman, added that she, too, was recently attacked by six unidentified individuals while she was returning to her Zayzay Town Community from the densely populated Red Light Commercial District of Paynesville

According to Madam David, the criminals forcibly took away her business money amounting to (L$21, 000) US$400.

She said the incident took place around St. Kingzito School in Paynesville. She made an appeal to the central government, through the relevant security agencies to fight crimes.