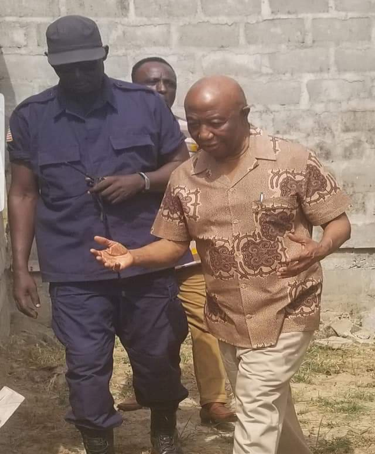 With the decision of the erstwhile ruling Unity Party (UP) to withdraw from the political marriage, the political morass that ensnared the Collaborating Political Party (CPP) appears to have come to an end. The opposition Alternative National Congress (ANC) stated former Vice President Joseph N. Boakai was not only leaving from the CPP but also running away from a democratic process because of his mistaken feeling of entitlement to the role of CPP Standard Bearer.

“The truth is that the Former Vice President is withdrawing his UP from the CPP only because his false sense of entitlement to the position of Standard Bearer of the CPP, was being successfully challenged by the ANC Standard Bearer, Mr. Alexander B. Cummings”, ANC said, stating that the CPP was not formed to ordain any individual as its Standard Bearer. The statement said CPP agreed on a binding primary process for the selection of its presidential candidate, where no consensus is met. “It is obvious to the ANC that Amb. Boakai is not just withdrawing his UP from the CPP, he is running away from a democratic CPP Primary defeat to Mr. Cummings”.

ANC said the withdrawal announcement also breaks the UP’s promise made to the people of Liberia that the CPP will remain the vehicle through which the bad leadership of Pres. George Weah will be replaced, and their hopes and aspiration for a better Liberia will be realized.

Cummings said while he welcomes Boakai’s right to withdraw, we vehemently denounce the many lies contained in the Statement of Withdrawal told against the ANC. The party said it would address the lies subsequently but suffice to say these falsehoods are intended to cover up the obvious weaknesses in the leadership of Amb. Boakai, which is highlighted by his inability to fulfill promises made to the Liberian people.

Cummings’ Party said the since the formation of the CPP it has had many issues which require astute and selfless characteristics in leadership. The Under the chairmanship of the ANC Political Leader, the CPP was faced with the issue of the Nimba Primary which threatened its existence. Mr. Cummings made the decision to save the CPP over his personal and party preference and interest, the statement said, intoning that similar decision was made with the 2019 Cape Mount bi-elections when the other parties reneged on the agreement for ANC to field a candidate.

“Over the course of the CPP formation, the ANC and Mr. Cummings have been targeted, insulted, maligned and even recently, have been conspiratorially implicated in a bogus Framework lawsuit. Yet, the ANC continues to remain committed to the CPP because the CPP is about the aspirations of the Liberian people and our promises to them”, the statement said.

ANC  promised not to make the CPP about entitlements or personal ambitions, it siad Amb. Boakai and his Unity Party cannot say the same, nor represent to Liberians that they have conducted themselves in a way and manner in the CPP to fulfill their promise to the Liberian people over their false sense of entitlements and seemingly undemocratic quest for power.

In this regard, the statement asserts, only the ANC and its Standard Bearer have consistently publicly said that if Amb. Boakai wins the democratic CPP Primary, the ANC and its leader will support Amb. Boakai as we would support ourselves as winners, ANC continues, “Amb. Boakai and his UP have never ever publicly or privately said the same. Hence, we are not surprised that sensing defeat, the Former VP would run away to form a new coalition, which will not democratically challenge his false sense of entitlement to the presidency”.

ANC said the country continues to suffer from the failures of its political leaders to keep promises they make to the Liberian people. Cummings’ party described said situation as unacceptable. “Too many of our political leaders lack the courage to make hard decisions, while too many make promises they have no intention to keep. Breaking promises, as we are witnessing, testify to weak, indecisive, dishonest and untrustworthy leadership”.

The ANC bided UP farewell stating that it wishes the Unity Party and the All Liberian Party well in their future endeavors. They said in due course, Mr. Alexander Cummings would more fully respond to this announcement and spell out the new direction of the CPP. “The hopes and aspirations of the people will not be thwarted and or destroyed due to a failure of the runaway leadership of the Former VP. The ANC remains committed to providing real change to our country for the benefit of all Liberians”, ANC concludes.