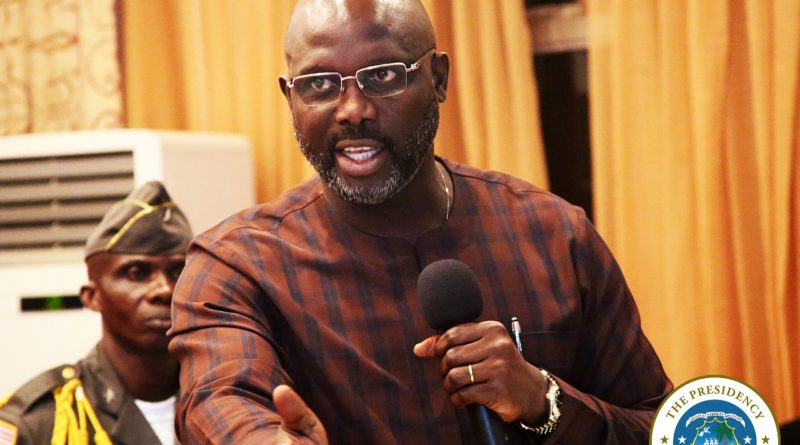 Monrovia: Liberia’s President George Weah says the current waves of insecurity prevailing in the country is of serious concern to all and he is therefore calling for each government officials and ordinary citizens to buy CCTV camera for security protection.

President Weah stated that the Government of Liberia will endeavor to provide security at the boarders to avert external threats while each Liberian should be their brother’s keeper.

The statement has sparked mixed reactions among Liberians across the country, with close associates of the government claiming that President Weah’s statement has been taken out of context, while critics of the president and his administration have termed the statement as unfortunate.

Some argued that President Weah has approbated the social contract he signed with the people of Liberia, upon his election and subsequent takeover as president of Liberia to protect the lives and property of all within the territorial boarders of Liberia.

A Liberian criminal lawyer, Authur Johnson told a local radio station that President George Weah needs to come clear with the statement as this is disappointing.

Cllr. Johnson added that the statement by the Liberian leader is dangerous to the peace and security of the country and that it has the propensity to create a state of insecurity.

He also encouraged the Ministry of Information to interpret the President’s statement to avoid what he calls mob justice and secret killings in the name of criminality.

The Liberia National Police by law is created to keep internal security, while the Armed Forces of Liberia protects the country from external threats.

President George Weah made the assertion last Friday during the signing of the book of condolence for the deceased Internal Audit Agency (IAA) Director General, Emmanuel Barthan Nyeswa.

It may be recalled, the fallen IAA boss Nyneswah died under mysterious circumstances.

The Communication Director of the IAA, Adolphus Kawah confirming the death of Nyeswa last month, disclosed that his boss had earlier gone to work on the day before his demise and did not show any sign of prior illness.

“I can’t provide any other information relative to the cause of his death now but all I can say is that he died 2am Saturday morning at his 72nd Boulevard residence as more details will be provided in subsequent time,” Kawah added in a telephone interview on Saturday morning to our reporter.

His death brings to four the number of auditors who died mysteriously within the period of eight days, last month.