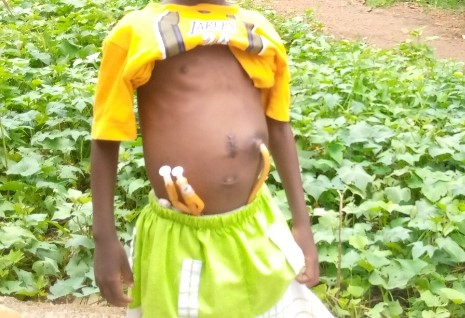 …As Aggrieved Mother Makes SOS Call To First Family, Others

A six-year-old girl and K-II student in Lofa County mistakenly drank a diluted caustic water in Lofa County. The child’s mother, Kebbeh Kolubah, has called on Liberia’s President George Weah, First Lady, Clar Weah, Lofa County Senator, George Tengbeh, humanitarian organizations and other well-meaning Liberians to come to her aid so that her dying daughter, Kulubo Kanneh, can be taken to Ghana or other countries for advanced medical treatment.

Speaking in an exclusive interview with this paper recently, Ma Kebbeh explained that her daughter drank the caustic water Friday, April 26, 2019, and has been taken to some local medical centers. The child is currently at the Eternal Love Winning Africa (ELWA) Hospital where she has been advised to take little Kulubo to Ghana in the shortest time for advanced medical treatment.

‘I make farms in Lofa County that I harvest and sell in our community market, but the income is not even enough to take care of our family, send my children to school, I cannot afford the hospital bills of my daughter’, Ma Kebbeh said.

She narrated that the incident occurred when her daughter went to spend some times with her father, identified as James Kanneh’s Sister, Sianneh Kanneh, in Salayea, Lofa County, who produces and sells iron soaps.

According to her, little Kulubo came from school on Friday and saw the cup of caustic water on a table in the sitting room. The child thought that it was a pure drinking water, and she took the water and drank it.

The caustic water was allegedly placed on the table by Siannah’s daughter, identified as Florence Sackie, who claimed that she forgot about removing it from the table after she washed her hair with it.

Ma Kebbeh added that her daughter was thereafter rushed to a local clinic in Salayea for treatment.

According to the woman, the child did not tell anyone about the incident until after nearly 26 days.

The child said ‘she was afraid to tell anyone. The child was taken to Zorzor Hospital where the mother was told to bring the child to Monrovia for proper treatment.

‘Kulubo saw the cup of caustic water in the sitting room on the table like a drinking water and drank it, but her aunty did not tell me for more than 26 days, and my daughter is slowly dying in my hands’, she said.

Ma Kebbeh said knowing nobody in Monrovia, she brought the child to the state-owned John F. Kennedy (JFK) Hospital in Sinkor Monrovia where she (child ) was denied admission for lack of bed. The mother then took the child to the ELWA hospital where the child was briefly admitted for medical attention.

The mother of three children also explained to this paper in tears that her daughter is now being fed through a tube with only creamy wheat and peanut butter which the Rescued Abandoned and Children In Hardship (REACH) Executive Director, Madam Ne-suah Livingstone, usually helps the child with.

According to her, the six-year-old child can no longer eat, and drink from her mouth because her throat has been entirely affected.

Little Kulubo mother’s said that the tube her daughter now feeds through costs about US$50 and needs to be changed after every three months.

The aggrieved mother disclosed that she cannot afford the money. She added that most times she bags on the streets to come up with little amounts that just can’t pay for the tube to be changed, thereby causing her to use super-glue most times on her daughter. The situation, she said seems to have worsen the wounds on the girl’s stomach.

She disclosed that her husband is not working because his fingers got cut from a welding work he was doing, and her children have dropped out of school to sell bread in Lofa County.

‘My husband is not working because his fingers got cut from a welding work that he was doing, and my children no longer go to school.