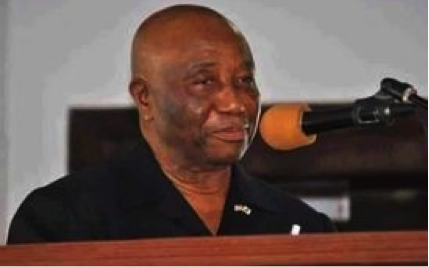 -Leading to ‘imposition of hardship on Liberians’

The Collaborating Political Parties (CPP), has blasted the Government of Liberia, for what the conglomeration of four parties call the scarcity of the Liberian dollar on the local market.

The CPP in a strong-worded statement issued Monday holds the GoL squarely responsible for the scarcity of the Liberian dollar banknotes, and claims such scarcity tantamount to the imposition of hardship on Liberians by the George-Weah lead government.

The CPP says it notes with serious concern that after the Government conducted what the party terms a controversial and fraud-laden US$25 Mop-Up Exercise in 2018, the last quarter of each year since then has been characterized by a strange scarcity of Liberian dollar banknotes on the market and a corresponding precipitous drop in the Liberian Dollar-US Dollar exchange rate.

“Not surprisingly, this nightmarish scenario has begun to raise its ugly head this year. This time around, it is the refusal of the government through the Central Bank of Liberia (CBL) to supply needed Liberian dollars, which has led to a complete shortage of the Liberian dollars on the market,” the CPP emphasized in its statement.

The Collaborating Political parties averred that this is not only counterproductive to the economic growth desperately needed, but it is broad daylight hardship being imposed on the people of Liberia by the CDC-led Government.

The CPP wonders “How can the government sit idly with such insensitivity to the Liberian people when prices of food, clothing and other essential commodities are still high while the Liberian dollar is appreciating,” indicating that “Our recent check on the CBL website shows that monthly data on inflation since June ending 2021 is yet to be published by the CBL. The CBL must wake up and not allow itself to be a puppet in the hands of politicians seeking their personal welfare over the Liberian people.”

The statement issued by the CPP’s Executive Committee, pointed out that “It is quite surprising to hear the Minister of Finance speak of achieving single-digit inflation in an environment of induced appreciation of the Liberian dollar against the US dollar. This, accompanied by the rapid eroding of consumer purchasing power is simply a sophisticated and well-orchestrated deception taking place before our very eyes.”

The CPP then called the attention of President Weah, reminding him that Liberians deserve better living conditions than what they are now experiencing after what the party referred to as all the Liberian leader’s campaign promises, stating, “regardless of how economic data and the facts are twisted, the average Liberian knows what it means to be hungry and deprived.”

“The people in basic terms, do not need anyone to tell them that as the local currency in which they trade and their salaries are paid appreciates, the prices of food items (especially their staple, rice), gasoline, transportation fares, school tuitions and fees, among others, are expected to reduce. Politics and economics are immiscible, the CPP stressed.

However, the party intimated that unfortunately, while Liberians suffer the excruciating effects of the country’s existing economic contradiction, some officials and apologists of the CDC-led government are rather celebrating the suffering of the Liberian people, indicating, “How can they claim that they are doing a good job when our people are crying this much?”

The CPP recalls that when officials of the CDC-led government were actively seeking legislative approval for the printing of additional Liberian dollar banknotes, they promised that this would bring to end, once and for all, what the party calls recurring last-quarter nightmare of shortage of Liberian dollar banknotes at the commercial banks and in the market.

Howbeit, the CPP wants the Legislature to give back the operational independence to the CBL that allows the CBL to print Liberian- dollar banknotes in line with economic fundamentals and stop using the current approval process negotiations every time the CBL come seeking approval to print.

“Do the honorable thing LEGISLATURE by addressing ambiguities in Part II Count 2, Counts 6B, 6C, and 6O; Part V Count 23 (1 and 2); and Article 34 (D) of the Liberian Constitution and ultimately amend the October 21, 2020 Amended CBL Act to restore CBL to normalcy and alignment with international and regional best practices. This should then pave the way for the appointment of competent and professional Liberians with track record in the business of monetary policy design and implementation to sit on the Board and Senior management of the CBL,” the CPP maintains.

The CPP therefore demands that the CDC-led government fulfills its promises and urgently puts an end to what it described as an exploitative and anomalous economic situation, indicating, “The CPP calls on the Government to stop seeking imaginary solutions to the challenges of the Liberian economy and instead focus on predictable actions and systemic changes that will improve the economic fundamentals of the country.”

These actions, according to the CPP, should include, inter alia, growing the productive sectors of the economy, improving service delivery across government, fighting corruption robustly and impartially, improving the security climate in the country including vigorously fighting ritualistic killings, supporting Liberian entrepreneurship in critical sectors such as agricultural value addition, and respecting the merit system.