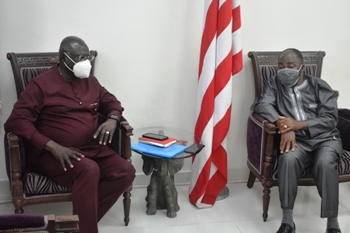 Monrovia – The Special Representative of the President of the ECOWAS Commission to Liberia, Ambassador Babatunde Olanrewaju Ajisomo has paid a courtesy call on the Minister of Foreign Affairs of Liberia, Dee – Maxwell Saah Kemayah, Sr., expressing his gratitude to the Government of Liberia for the kindheartedness shown him throughout the course of his assignment to Liberia.

Amb. Ajisomo expressed warmest gratitude to the Government and people of Liberia and held useful and productive discussion with Foreign Minister Kemayah at his Foreign Ministry office on Capitol Hill, Monrovia.

The meeting took place on Friday, December 11, 2020 in the minister’s holding room on the fourth floor of the Ministry of Foreign Affairs.

The Special Representative of the President of the ECOWAS Commission further recalled the   captivating role his office played in the United Nations Mission in Liberia (UNMIL’s) drawdown and up to its closure, securing an ECOWAS radio for Liberia and ECOWAS member states and facilitating the 2017 elections, among others.

Responding to Ambassador Ajisomo, Liberia’s Minister of Foreign Affairs Dee-Maxwell Saah Kemayah, Sr. noted that Amb. Ajisomo’s output in the field of diplomacy is more than twice the number of years the ECOWAS envoy has served in the field, praising him also for having ECOWAS and Africa at heart.

Minister Kemayah noted that he got to know the ECOWAS envoy Amb. Ajisomo before assuming his role as Minister of Foreign Affairs, adding, “we  worked together while serving as president of the Liberia Business Association (LIBA) prior to the 2017 elections that ushered in the current administration.”

Minister Kemayah lauded Amb. Ajisomo for always demonstrating the highest degree of professionalism and passion for the work he does, adding that without any flattery, he sees Amb. Ajisomo’s representation and work in Liberia as exceptional, high earned and exemplary.

“And those are the kinds of qualities that we look for, and your work yielded and continues to yield fruits,” Minister Kemayah added.

Furthermore, the Liberian Foreign Minister stated that Amb. Ajisomo played a key role in giving an opportunity for those who may wish to be heard to have a voice through the provision of ECOWAS Radio.

The Foreign Minister recalled that in the midst of huge number of persons protesting, he saw Ambassador Ajisomo in their midst as a diplomat, negotiating peace as a way of preserving the stability of the country that ECOWAS, UN, and other major partners of Liberia fought to restore.

He described Amb. Ajisomo as a role model in diplomacy, saying hats off to the ECOWAS envoy on behalf of President George Manneh Weah and the Government and people of the Republic of Liberia, and in his own name, for his invaluable services rendered to Liberia, the sub-region and Africa as a whole.