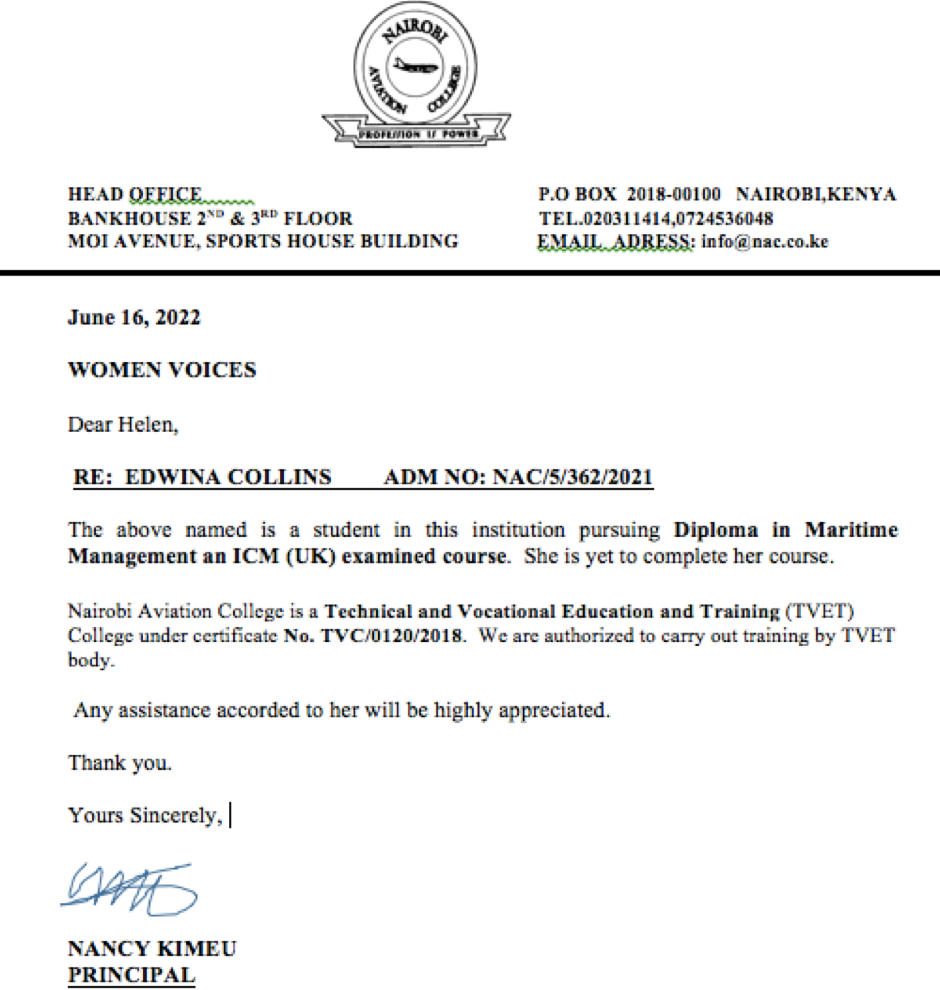 Ms. Edwina Collins at the hearing of Senate confirmation

After verifying the legitimacy of the Nairobi Aviation College a week ago, the Womenvoices Newspaper (WV) wrote to inquire about Ms. Edwina Collins. She is the candidate that President Weah selected for the position of Deputy Commissioner for Vessel Registration and Safety at the Liberia Maritime Authority, but was rejected based on apparent disinformation. The Womenvoices Newspaper (WV) wanted to know if Ms. Collins was currently a student at the institution studying Maritime Management.

The paper wrote: “Womenvoices Newspaper sends greetings and inquires about Ms. Edwina Collins from Liberia, whom President Weah recently nominated as deputy commissioner to the Maritime Authority but was denied by the Liberian Senate on the grounds that she does not have maritime education training as she claimed to be attending Nairobi Aviation College”.

The letter indicated that Womenvoices Newspaper is a Liberian daily that promotes women’s rights and gender equity. “We intend to publish an article to protect her rights if you can provide us with information about her status at your college and proof of the legitimacy of Nairobi Aviation College.”

In response the Nairobi Aviation College confirmed that Ms. Edwina Collins is a student pursuing diploma in Maritime Management.

The College said Ms. Edwina Collins is student in the institution with the admission #: NAC/5/362/2021.

“The above named is a student in this institution pursuing Diploma in Maritime Management, an ICM (UK) examined course,” the letter said and emphasized that she is yet to complete her course.

Just as this paper independently established, the letter said, “Nairobi Aviation College is a Technical and Vocational Education and Training (TVET) College under certificate No. TVC/0120/2018.  We are authorized to carry out training by TVET body”. The letter further urged the public Ms. Collins in whatever way they can. “Any assistance accorded to her will be highly appreciated”.

Observers believe that the Liberian senate’s decision to reject President Weah’s nominee, Ms. Edwina Collins, for the position of deputy commissioner for vessel registration and safety at the Liberia Maritime Authority, was based on public disinformation.

Contrary to their claim, it has been established that the Commission of University Education lacks the authority to certify technical colleges such as Nairobi Aviation College. Technical colleges in Kenya are accredited by the Technical and Vocational Education and Training Authority.

The false impression appears to have fueled negative public sentiment against the nominee, leading many Liberians, including members of the Liberian Senate, to believe that Ms. Collins was lying and lacked the educational qualifications she claimed, resulting in her rejection by the Liberian Senate plenary.

As was observed during the hearing, certain members of the Senate Standing Committee on Autonomous Agencies and Public Enterprises were overly critical to verify whether Ms. Collins is studying Maritime Management at Nairobi Aviation College as she indicated on her resume during the hearing. Sen. Jonathan Sogbie of River Gee County is seen in a video clip circulating on social media questioning the nominee about her claim to have studied Maritime Management at the Nairobi Aviation College.

“Your CV indicates that you are a student at Nairobi Aviation College’s Maritime Management component. Is that correct?” Unfortunately, I’m on the Nairobi Aviation College’s website. Except for the fact that I am on a different page, there is no mention of maritime management, so if you could give me your website address to check that, I would appreciate it. “Trust me,” he said.

Madam Collins responded that she is a Maritime Management student at Nairobi Aviation College and that she will send the Senator the website address via email, since she did not have assess to internet in her current position.

Ms. Edwina Collins joined at Nairobi Aviation College in May 2021 and has only one external examination to be administered by a UK based institute to complete her studies at the college, according to our findings. She is now a perspective graduate pursuing a master’s degree in Gender and Development Studies at Nairobi’s Kenyatta University. She has a Bachelor’s degree in Economics from the University of Liberia and a number of post-graduate certificates, including a certificate in sexual and gender-based violence among women and girls, youth empowerment, a certificate in network engineering from Blue Crest University College, a certificate in computer database management, and advanced word processing, a skill that she said could be very useful in creating, coordinating, and managing the shipping region.

The goal of the Maritime Management course, according to the school, is to provide prospective Maritime Management learners with a body of knowledge that will increase and broaden their employment opportunities within the maritime industry globally; provide them with a clear understanding of all economic, legal, technical, and managerial parameters that apply in the shipping industry; and enable them to integrate their knowledge gained on the course in analyzing and proposing solutions to problems.

“Only Cheating can stop Lawrence’s win”

‘Smoke of Possible Fraud at NEC’