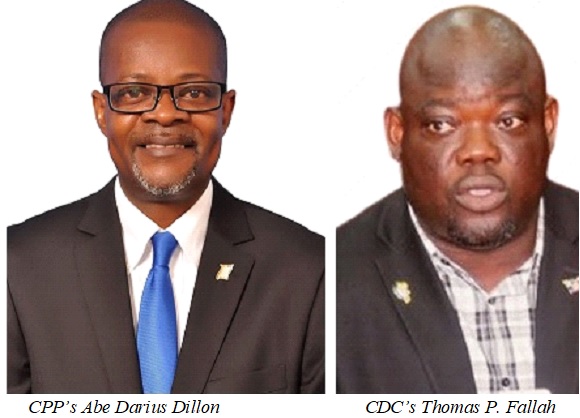 As the National Elections Commission (NEC) announces provision results from the just ended special senatorial elections across the country, 2020 , supporters of both the ruling Coalition for Democratic Change (CDC) and the Collaborating Political Parties (CPP) are claiming victory in Montserrado county.

On his official Facebook post, Montserrado County senatorial candidate, Representative Thomas Fallah of the ruling CDC said he is in a comfortable lead but indicated that he does not has the authority to announce the elections results.

Representative Fallah said the power is with the voters and use his post to call on the National Elections Commission to respect the will of the voters by ensuing a fair and transparent electoral process.

He further called on his supporters and partisans of the CDC to be calm but vigilant,” let us protect our peace but we must also protect our votes”.

At the same time, the Secretary General of the former ruling Unity Party (UP) and an executive of the opposition Collaborating Political Parties, Mo Ali, on his official social media Facebook post, descried the chairperson of the National Elections Commission (NEC) Davidetta Brown Lansana, as a compromised elections Commissioner.

He further alleged that supporters of the ruling CDC are taking down the original results placed at polling centers and replacing them with their results.

“NEC, I just want you to know that we are ready to resist any nonsense coming from any corner if you want to degenerate this country, we will stop you right in your track leading to conflict,” Mr. Ali said.

At the same time, CPP Montserrado County candidate, Abe Darlus Dillon, on his official social media Facebook page said “NEC just so you know, we are alert and watching, we have our tally sheets just so you know’’.

Senator Dillon further said that “our people voted in a peaceable and orderly manner, their will must prevail, do not tamper with their decision.”

Speaking to a cross section of Liberians, he decried acts that have the propensity to undermine the peace and stability of the country.

David Tabolo, a resident of Paynesville, urged political leaders to ensure that they protect the peace by encouraging their supporters to sustain the peace in the country.

Justina Kollie wants Liberians especially the young people not to be moved by what she called politicians who do not love this country because of their personal interest.

She called on the religious community to keep seeking the intervention of God for the peace and stability of Liberia.