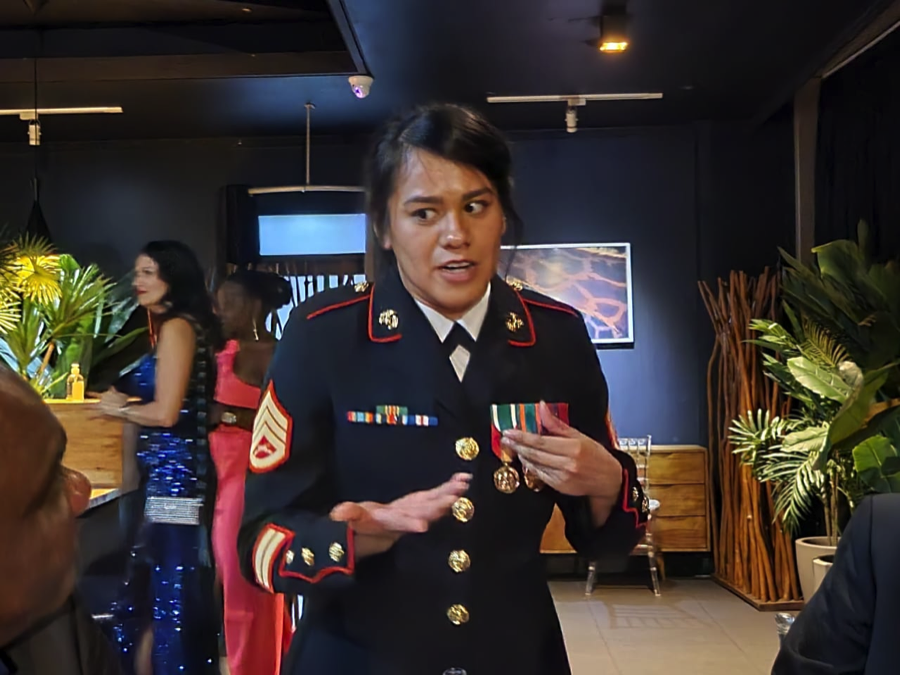 The U.S. Embassy near Monrovia, on November 13, 2021, organised a ceremony in observance of the 246th gala anniversary of the U.S. Marine Corps at a local hotel in Liberia.

Dignitaries, including the Chief of Mission, Deputy Chief of Mission of the American Embassy, senior government officials of Liberia and people from across the Liberian society graced the colourful ceremony.

Introducing US Ambassador accredited to Liberia, Michael A. McCarthy, who was the Guest of Honor, was Staff Sergeant Alma Cavazos; the Detachment Commander of the Marine Corps in Liberia.

Staff Sergeant Alma Cavazos, who appeared very lively and energetic, in a brief chat with members of the “Hue City” Table that had Deputy Chief of Mission Joel Maybury as head of table at the occasion, disclosed that she has served the US Marine for about 10 years now.

Staff Sergeant Cavazos has to her credit several medals for extraordinary service and leadership.

In her introductory remarks, she divulged that on June 2, 2020, Ambassador Michael A. McCarthy was nominated by President Donald Trump to be Ambassador Extraordinary and Plenipotentiary of the United State of America to the Republic of Liberia, adding that he was confirmed by the US Senate on November 18, 2020 and arrived in Liberia on January 6, 2021.

She said Ambassador McCarthy is a career member of the Senior Foreign Service, class of Minister-Counselor, who she said, previously served as Consul General of the U.S. Consulate General, Johannesburg, South Africa.

According to the female Marine officer, Ambassador McCarthy also served as the Director of the Office of Retirement in the Bureau of Human Resource in the State Department and as Deputy Chief of Mission for the US Embassy in Juba, South Sudan.

For over 230 years since 1949 after World War II, the U.S. Marine Corps was established to protect American Embassies, Consulates and Legation throughout the world.

Symbolizing the strength, maturity and strong commitment that leaders of today’s Marine Corps will pass down to future marines, the sword is used to cut the cake, which serves as a reminder that marines are a band of warriors committed to carrying the sword.

At the ceremony, Sergeant Major Allen Szczepek, who was the oldest marine and Guest Speaker, passed the first piece of cake to Lance Corporal Jack A. Stamp, a twenty-year-old man that graduated from the Marine base on July 23, 2021.

General David H. Berger, Commandant of the Marine Corps, in a special birthday message contained in the program sheet, reminded officers of the Marine Corps of the traditions that link them to the elite who wore the uniform before them, stating that “the traditions we hand down through the generation go far beyond tangible displays, symbols, or customs.”

“We can not know for certain where future battlefields will be, or how our methods of war fighting will be redefined as threats to our nation evolve, but we can ensure that the marines who fight those battles will be forged of the same courage, spirit, and war fighting excellence as all marine before them,” he stressed.

General Berger said those who serve today, represent an unbroken chain that starches back 246 years, saying, “As we mark our anniversary, we look over the horizon to new service, new dedication, and new achievement.”