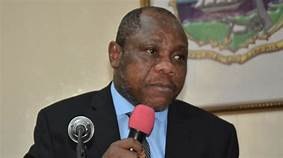 The Liberian Government has introduced a new Fiscal Policy on how the Liberian President can now report on the Country’s revenue and expenditure to the National Legislature.

Finance Minister, Samuel Tweah, said: “Under the new policy, the President is constitutionally mandated to report revenue and expenditure to the National Legislature from January to December, each year.”

Mr. Tweah said:” The Liberian Leader will now make such report to the National Legislature annually, as enshrined in Article 58 of the Liberian Constitution over two-half Fiscal Periods.”

Speaking Monday, October 26, 2020, at the launch of the Budget Transitional Policy, held at the Ministerial Complex in Congo Town, Monrovia, the Finance Minister said instead of the two-half fiscal periods, the National Budget would now be implemented under a period of one fiscal year, beginning January to December.

Minister Tweah further noted that since the two fiscal years may have different revenue and expenditure patterns, it is important for the President to report on one fiscal year.

He noted that the fiscal year is aligned with other ECOWAS Countries, especially as the region transitions to a single currency regime.

She said the amended and restated Public Financial Management Act which calls for change in the fiscal year from July 1-June 30 is in consonance with regional reporting.

Minister Bruson, however, said the transition to the fiscal year will be a challenge, as it requires Government to prepare two budgets almost simultaneously.

Madam Bruno said:” The objective of the Public Financial Management Reform is to maintain macro-economic stability and bring sustainable growth.”