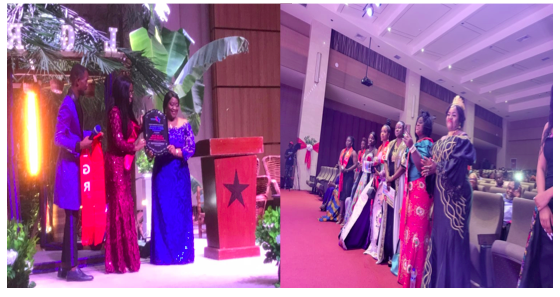 The Vice President of the Republic of Liberia, Honourable Chief Dr. Jewel Howard Taylor has urged Liberian women to find their passion and be committed to it.

She admonished women that they should find things that lie within their passion and that is the only way they can go forward.

She made these statements on Thursday, December 30, 2021 at the Program marking the 6th Annual Gala of Liberian Girls Rock (LGR) held at the Ministerial Complex in Monrovia.

LGR is a diaspora based non-for profit organisation that was established in the United States of America by a young Liberian entrepreneur, Eugenic R. Nice. The aim of the Organisation is to promote and empower Liberian women across the globe.

Delivering the keynote address at the ceremony where eight Liberian women were awarded for their diligent and exceptional services to their communities and nation, VP Taylor emphasised that if one does not have passion for what she does, she might end up getting tire because she does not put her soul or part of her into it.

According to her, everyone has a legacy and should not fail regardless of circumstances, stating that everyone has something to do for his or her country.

“What are you doing? Because everyone has the opportunity to do something so tonight if you want to become one of the girls that rock in Liberia firstly, find your passion and make sure that it is something that you love more than yourself because this is what it takes. Prepare to walk this difficult path, in fact, our own women will be pulling you down too, you know we have PHD (Put Her Down) syndrome, when you are doing something good they will be pulling you to sit down,” she said.

However, the Vice President of Liberia, who was also honoured for her powerful services to Liberia told the women to be prepared for the walk and remain committed and not only that but they should also persevere.

She added that the women should understand that they have to persevere at all cause and in doing so, they should not listen to negative things people would say but rather keep walking and in the end people will realised that they are up to something good.

She maintained that the women of Liberia must succeed adding, “10 years from now I want to hear these same stories at amazing levels because we have to succeed”.

Speaking further, VP Taylor noted that little girls learn by seeing other women do something emphasising that this is how greatness comes about.

She recalled that they stood on the shoulder of Madam Ellen Johnson Sirleaf and other great women of Liberia and they taught it was nothing if they do not give back and mentor the next generation.

Meanwhile, Chief Dr. Taylor stressed that nothing is more important than service to the nation, she said that is what come in the end as they mentor others, “tell them each one has to step up and step out of their comfort zone and by doing that they make many new stories which will be to their credit and the credit of their beautiful country”.

She mentioned that women complete the world that is why when God created everything on the earth he taught that it was not complete because the woman was absence so God decided to make woman who is completion of God’s work”.

She encouraged the honourees that each of them carry a special fire in their souls to transform their family, community and nation as such they should never let anybody put them down because there is something that they can do to help lift mama Liberia.

“What I see as I stand here today is a new generation coming up and we want to thank each and everyone of them for being exceptional in their areas, the truth is we are walking through fire, just remember that as you continue your work and anytime you want to break barriers and bring change and transformation you go against people, so they will try to stop you because this is what those who make a change and bring difference will go through., She told the honourees.

Meanwhile, VP Taylor also expressed delight to be part of the call of young women for seeing them standing up and picking their own spare of studies, being it politics, humanitarian work or whatever it is emphasising that each one of them have chosen something to their heart and when they talk about Liberian Girls Rocking someone have to find something that lies in their passion and that is the only way they can go forward.

She further appreciated the Chief Executive Officer of LGR, Mr. Eugenic R. Nice for hosting the 6th Annual Gala in Liberia stressing that the LGR continue to highlight women in Liberia who are doing amazing things.

“If I go home tonight, I will sleep a bit better because I know there are many people doing many things across our country and lifting the banner,” she said.

Searching for the forgotten heroes of World War Two