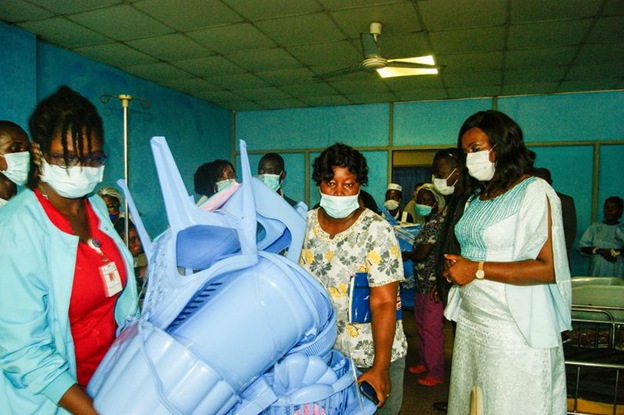 Children are a special and precious gift from God. In spite of the pregnancy discomforts and the nearly 14-hour excruciating labor pain that mothers undergo, giving birth is always marked by great joy and celebration in families and communities.

However, one thing that stifles this joy and brings shame to many mothers is the inability to pay their medical bills. Consequently, the already exhausted mothers wishing to proudly return home with their new born is withheld even though they may be ready to be discharged. This situation is common at Liberia’s largest referral hospital, the John F. Kennedy Memorial Medical Center and other medical centers.

But as dozens of mothers worried about their financial difficulties, Liberian First Lady and ‘Mother of the Nation,’ Ambassador Clar Marie Weah ran to their rescue, clearing the bills of at least eighty (80) new mothers, in the tune of (US$3,000) three-thousand United States Dollars.

It was the fateful afternoon of March 11, 2021; Mrs. Weah’s birthday! Like previous birthdays which she spent with wayward children at various orphanages, the First Lady had decided to mark the day with women and children at the JFK Maternity Center in Monrovia.

Mrs. Weah has always opted to celebrate her birthday with the least-fortunate the population she has dedicated her mission as First Lady to lifting from poverty.

The Liberian First Lady expressed gratitude for yet another birthday, and for her, the best way to have manifested her gratefulness was by identifying with in-patients at the JFK Maternity Ward.

“I’m so happy because today is my birthday, and what better way to spend it than to be with the women and children of Liberia,” said Mrs. Weah in a brief interview with journalists following her tour and interaction with in-patients at the maternity center.

“I’m happy to be here to give gifts to some of the children who were born on my birthday (March 11) and also considering the parents who were not able to pay their bills and go home, I will also cover their expenses.”

This great relief of clearing the bills and providing over thirty-two packs composed of baby tubs and accessories came as a surprised to the mothers who termed the First Lady’s intervention as a blessing from God.

They were extremely grateful and appreciative as they were joined by nurses and staffers at the JFK Hospital in offering prayers and birthday wishes to the First Lady Clar Marie Weah.

With big and unending smiles on the faces of the Liberian women and children, including the eight who were born on March 11, Mrs. Weah left the JFK Maternity Center quite satisfied with a birthday well commemorated.