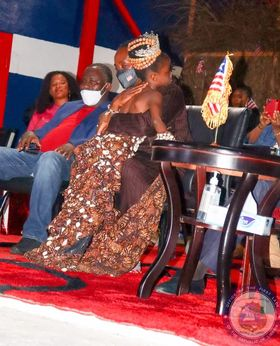 Stevanet, a kindergarten-2 (K-2) student of Light Academy in Congo Town, was awarded the scholarship for her spectacular and confident performance as a beauty queen during this year’s world tourism day celebration on Providence Island in Monrovia.

Antony McNeil and Janet Bull described Mrs. Weah as a selfless and caring mother who is passionate about investing in the future of the underprivileged and marginalized Liberians, especially women, girls and children.

During her brief interaction with Anthony and Janet, the First Lady disclosed that she was thrilled by Stevanet’s confidence and smart performance, noting that the six year-old is gifted and needed full support to realize her life dreams.

Mrs. Weah said she was convinced that little Stevanet has a lot of potential and would become a great child in the future.

According to the Liberian First Lady, her decision to help Stevanet and other Liberian children in dire need is to make an impact in their lives by giving them hope for a brighter future through quality education.

Speaking in separate interviews following their meeting brief meeting with Mrs. Weah, Stevanet’s parents disclosed that the First Lady’s gesture was a total surprise, as they did not know the First Lady personally nor did they ever make any such request.

“When it comes to the area of her (Stevanet) being picked-up, I know something like that was going to happen because I saw her performance when she won the ‘Miss Thinker’s Village Kiddies Beauty Pageant’. But I didn’t think it that way, that it was going to draw the attention of the President and his wife,” Anthony asserted, as he struggled to control his excitement.

“Right now I feel so happy that she (the First Lady) was able to pick my kid,” he said, while praying for God’s abundant blessings on the first family that they will never lack, ‘even as they have promised to sponsor his daughter.’

Stevanet is an exceptional kid. Though her mother owns a mulling agency which trains teenage girls in the art of mulling, she was never a student there nor has she ever undergone any of the training.

This was puzzling until her crowing and sashing as winner of the Miss Thinker’s Village Kiddies Pageant, when she revealed to her mom that she was always an ardent observer whenever the girls were practicing.

“This day I just decided to put her in the Miss Thinker’s Village Kiddies Pageant to see if she could give it a try and she won!” said Janet, stressing that Stevanet’s victory was amazingly shocking.

“She was like… ‘Mamie when you take me along to train your girls I can usually be observing them keenly. There is where I learned all my things from.”

Janet could not stop thanking the First Lady, stressing that the sponsorship to enable her daughter acquire quality education removes a huge burden off her shoulders as a mother of two, especially during these difficult times of the covid19 pandemic.

“The First Lady helping me with her (Stevanet) is really going to reduce my burden and I’m really excited about that,” said Janet with endless smiles.

“I want to tell God thank you for sending her (the First Lady) on our way to spot-out and support our daughter. I want to say thank you to the First Lady and I appreciate so much that I don’t even know how to express this joy.”

Stevanet is just one of several other kids, most of whom were taken from orphanages around Liberia, who are benefitting from such rare opportunities. Mrs. Weah, since taking on her role as First Lady nearly three years now, continues to work assiduously in various ways possible to improve the lives of the underprivileged and marginalized Liberians.