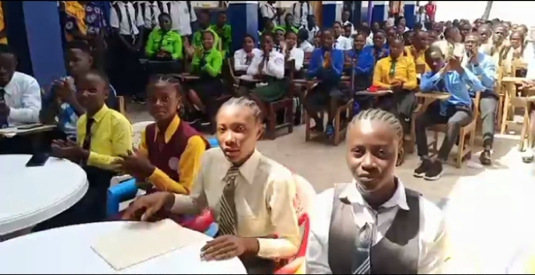 The Students leadership addressing the media

President Weah will be honored on May 4, 2022, by the United High School Students Association of District # 6 for paying three academic years’ worth of West Africa Senior Students Certificate Examination (WASSCE) fees.

The leadership of the District #6 United High School Students Association stated at a news conference on Tuesday, April 5, 2022 at the Calvary Temple Assembly of God Mission High School in Jacob Town, Paynesville, that the organization is a non-political organization whose goal is to enhance and promote the wellbeing of senior high students across the district.

According to the Student Association, in 2018, the President announced the government of Liberia’s intention to continue paying all 12th graders’ WASCC fees, reducing the financial burden on parents and allowing them to study and perform, as evidenced by the last two WASCCE results.

According to them, student performance was at an all-time low before President Weah’s laudable intervention, and both parents and students felt the pressure of footing the cost of WASCCE tests, resulting in academic discretion by limiting their ability to adequately prepare and deliver.

The student body noted that they wish to announce to their mothers, fathers, brothers, sisters, colleagues and Liberians in general that on May 4, 2022, they will honor President Weah for the full payment of their WASSCE fees for the past three academic years.

The students used the medium to thank the Director of Mines at the Ministry of Mines and Energy, Arthur C. Gotolo, and the Ministry of Education for partnering and working with them to proudly appreciate President Weah.

According to them, Mr. Gotolo is a permanent son of the beloved District and is hereby appointed as Chairman of the Board of Advisors.

For his part, Mr. Gotolo, in a brief statement, promised to work with the students to make sure that the program is a success.

He also thanked them for the opportunity given to him to help in the process and therefore looked forward to a successful program.

He added that on Monday, April 4, 2022, he took some students to meet the Minister of Education and they agreed to work with the students to appreciate the President on May 4, 2022.

“So, we can rest assured that we are with you and this is not just District # 6, but a lot of students from other districts are also wishing to do similar things, but thank God you are the first to start, and so we will work along with you, and after this, we will see how best we can go from district to district because almost all of the students in Montserrado want to appreciate the President,” he asserts.

Director Gotolo further thanked the administration of the Calvary Temple Mission High School for allowing the students to use their building to conduct the press conference.