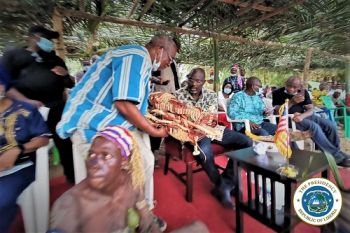 President George Manneh Weah, says citizens and residents of Gbi-Dorru are Liberians who deserve equal treatment and rights to enjoy the benefits of governance like any other Liberian or group of Liberians.

After driving 102km road containing 33 wooden, unguided and unprotected bridges, the Liberian Leader arrived in Dorgbor Town, the seat of Gbi-Dorru Statutory district to interact with locals there.

Residents who felt liberated by the arrival of Dr. Weah, the first President to visit those parts of the country since1938, displayed enormous emotions greeting the President and made known their plights to the President and delegation.

The citizens bemoaned the treatment meted out against them, including being isolated from local administration, development, jobs, social and economic benefits in Nimba County despite 84 years of co-existence.

“Please grant us independence in the form and fashion of a county status that would be named and styled Gbi-Dorru County with Dorgbor Town being its headquarters; please grant the Gbi tribe an official and statutory recognition so that Gbi will be the 17th official tribe of the Republic of Liberia,” the citizens pleaded in a petition statement read by Mr. V. Simmons Kidka.

In response, President Weah told sons, daughters, fathers and mothers and sympathizers of Gbi-Dorru that granting such status requires legislation and promised to work with lawmakers to do what is in the interest of the Country and Gbi-Dorru.

Although Gbi-Dorru awaits legislations that would address their expressed plights, they won the heart of the President, as a lot of developments and good tidings looms in the horizon for them.

In addition to replacing their huts with modern structures, President promised to provide solar electrification, health center, schools and social developments as well as improving the dilapidated bridges in the region.

While in the Gbi-Dorru, the President joined locals in brushing a portion of his 1,500 acres of farm land.

The Liberian Leader promised to regularly visit the community, which is of his maternal grandparents.

Harvest University gets off to a gloomy start