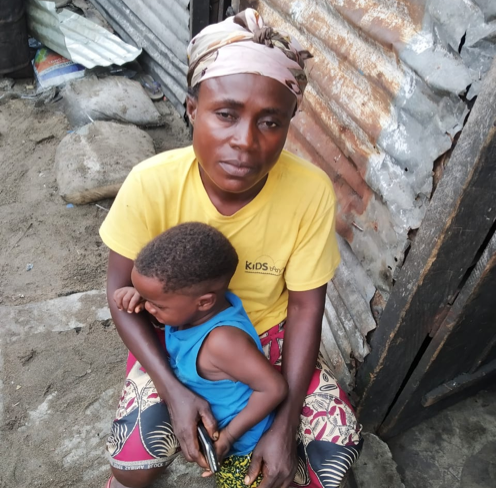 Ms. Tracy Weah, mother of three children whose husband was shot and allegedly killed late Monday evening, June 4, 2022, by an agent of the Emergency Response Unit (ERU) of the Liberia National Police, James Togba, alias “Opoku,” is calling on the government of Liberia through the Liberia National Police and the Ministry of Justice to speedily investigate and dispense justice without favor in the murder of her spouse.

Speaking in an exclusive interview with this paper on Tuesday, June 5, 2022 at the deceased resident in New Kru Town, Ms. Weah described the death of her late husband as a serious heartbreak and disappointment, adding that she was now left alone to take care of her children as a single mother.

Olando Bloh was allegedly gunned down while his colleague Kengar Kennedy was wounded on Monday evening in the New Kru Town, Fuel Oil Community, by ERU officer Togba, who discharged a live bullet when he went to the ghetto to demand money from a drug dealer in the Fuel Oil ghetto.

The late Bloh was thought to be a disadvantaged young-man, but he had three children and a wife who had been with him for over twenty years. The victim was taken to the John F. Kennedy Medical Center and was later pronounced dead on arrival by the doctor on duty.

“I am calling for justice for my husband and help from the government and other people that can help.” My husband and I have three children, two boys and one girl. Our older son is 19 years old and he will be graduating this year from high school. Our other son, the last, is going to be three years old now, while our daughter is 12 years old. My problem now is how I am going to take care of these children and send them to school without the help of their father. I am really broken and in serious tears,” she tearfully narrated.

The Liberia National Police said that they took Officer James Togba’s uniform off and turned him over right away because he was involved in the shooting that happened in the Fuel Oil Community, Point Four, Busrhod Island.

The LNP has expressed dismay over the shooting incident in New Kru Town and vowed to ensure that the officer involved will be duly investigated and made to face the full weight of the law.

In a statement released on July 5, 2022, the LNP’s spokesperson, Moses Carter, said that the officer is being held at the headquarters of the Liberia National Police while an investigation is done. Carter also said that the LNP administration has already reached out to the family of the victim who died and offered its condolences, assuring them that justice will be done.

“Yesterday we were sitting down in the ghetto smoking when this ERU guy called “Opoku” (Togba) came to us and demanded that he needed five thousand Liberian dollars from us, as he usually does. My husband is the five-star of the ghetto, and so he and I came out to call the men outside. We told him to wait and we went out to the guys to organize small thing for him, but they said that today is Monday, so the five thousand he wants, we can’t afford it, but we will give him six hundred. When I went to call my husband in the ghetto, the officer started complaining that we were making fun of him, so that is how he fired and killed our friend,” Ms. Susan Sando said.

According to her, after the officer shot in the tarpaulin, the others that were in the area alarmed that he killed someone, but he denied it and wanted to run away, they stopped him and turned him over to the army guys that were around and took their friend to Redemption Hospital, where he was transferred to JFK because they never had space.