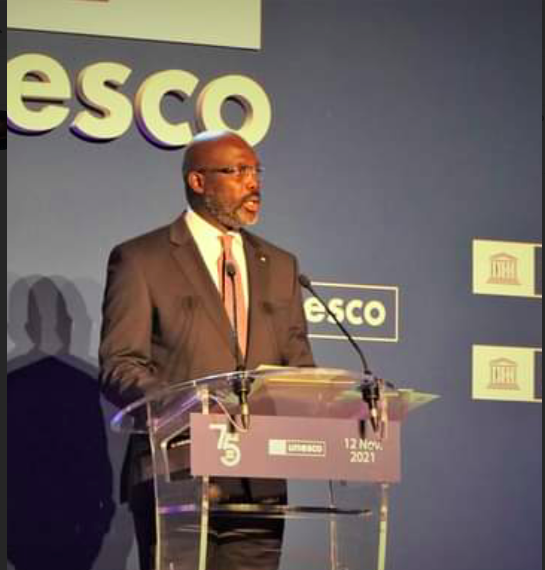 President George Manneh Weah, at a global forum, has reaffirmed his commitment to gender equality, stating that he is personally passionate about gender equality and that the world can never be a better place as long as there is discrimination against women.

“The world can never be a better place so long as there is discrimination between men and women.  I personally am passionate about gender equality, because I believe that men and women are equal citizens, and should therefore enjoy equal opportunities, and have equal access to knowledge and skills, if a society is to develop to its maximum potential”, President Weah said.

President Weah said as Feminist-in-Chief, achieving gender equality is a top priority of his administration. “As President of the Republic of Liberia and a self-titled Feminist-in-Chief, I have long been a champion of women’s rights and a “HeForShe”.  As such, achieving gender equality in Liberia is one of the top priorities of my Administration, and I remain committed and obligated to ensuring that my Government achieves this within the context of Sustainable Development Goal #5”.

The Liberian Leader said because of the inherent disparities in society against women and girls, he said, there is an urgent need to develop and strengthen mechanisms for their full protection and empowerment, “to ensure that their rights are protected and their livelihoods are sustained”.

He informed the world body that his government has made significant strides in legal and systemic reforms to lawfully address the entrenched inequalities that exist between men and women.  “These will be presented in detail by my delegation during your further discussions”.

President said it was an honor for him once again to have the privilege of attending the General Conference of UNESCO to discuss pressing global challenges, with a view to finding solutions that will make the world a better place.

On behalf of the Government and People of Liberia, and in his own name, President Weah congratulated UNESCO on the 75th Anniversary of its existence, of which founding convention Liberia was a signatory.

“Let me also congratulate the Director-General, Ms. Audrey Azulay, for her re-election to a second five-year term to continue her dynamic and innovative leadership of UNESCO, especially during these challenging times”, he said.

The Liberian leader reminded the World body about the stark reality that the future well-being of the entire planet is not only threatened by the devastating consequences of global warming, caused by the high emission of greenhouse gases from the industrialized nations of the world, he said that the time window for corrective behavior is rapidly shrinking.

“We are also acutely and distressingly aware that the world is still suffering from the terrible Covid-19 pandemic, which for almost two years now has caused the unfortunate deaths of millions of people around the world, and has taken an unprecedented toll on the ways of life and on the livelihoods of all survivors”, President Weah said.

He said the unfortunate developments should remind us of our collective responsibilities and the roles we must all play in looking ahead, beyond present and pending disasters, to find global solutions that are sustainable, equitable, and inclusive.

The Liberian leader recommitted support for the agenda and programs of UNESCO.  “We wish you every success in your deliberations, and we pray that the new targets, which will be set here in the areas of education, science, and culture, will be achieved through your collective wisdom”.

Plus Liberia Partners With Orange Liberia Telecommunications To Create Revenue For...