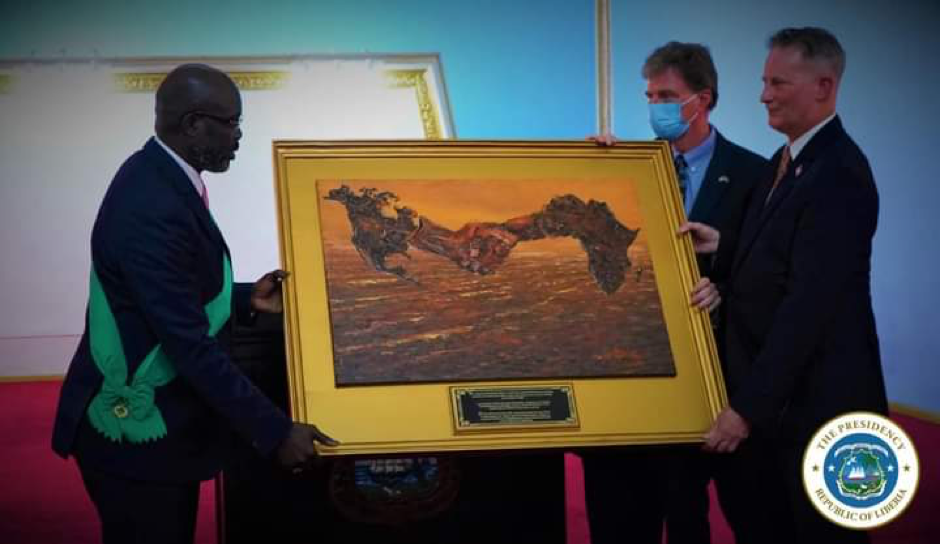 President Weah Ambassador McCarthy of US

On the occasion of the 175th anniversary of Liberia’s independence, the United States Ambassador, Mr. Michael McCarthy, conveyed to President George Weah that President Joe Biden would like to extend an invitation to him to attend the leadership summit in the United States of America.

In response President Weah said, “To my good friend Ambassador McCarthy, please inform President Biden that I received and accept his invitation to attend the Summit in Washington D.C. I will be there to represent the Liberian people.”

This invitation comes amidst criticism that George Weah was the only Liberian President in recent history, besides Charles Taylor, who did not receive official invitation to visit the United States of America that is considered Liberia’s traditional friend.

He said such a goodwill was manifested by the decision of the American Government to make a commemorative plague that was given to Liberia on the occasion of our Centennial Celebration on July 26,1947. And now today, at this celebration of our 175th Independence Anniversary; we have just witnessed the resubmission of that plague to the Government of Liberia by the American Ambassador to Liberia H.E. Michael McCarthy.

President Weah said the 175th Independence Celebration this year is unique, because it also coincides with another major national milestone, which is the observance and celebration of our Bicentennial, marking 200 years since our founding.    These large numbers which define our continuous existence as a body politic are genuine and valid reasons for celebration.

On Tuesday, July 26, 2022, the Capital City of Monrovia played host to festivities commemorating the 175th anniversary of Liberia’s declaration of independence. The colorful event was attended by several heads of state and government from the sub-region, including President Mohammadu Buhari of the Federal Republic of Nigeria, President Umaro Sissoco Embalo of Guinea Bissau, who serves as the head of the ECOWAS Authority, and President Adama Barrow of the Republic of Gambia.

While wishing Liberians throughout the country, and Liberians everywhere in the world, a Happy and Enjoyable 175th Independence Day, President Weah, thanked God for his Goodness and Mercy that have followed Liberia throughout all these years since the founding, and has always protected Liberia from the many dangers that have threatened the national existence.

President Weah said in spite of our own shortcomings and weaknesses, God has kept us united as One People.

“Today, we are greatly honored, and pleased, to welcome several Heads of State, who have taken the time out of their busy schedules to join the People of Liberia in celebrating this 175th Independence Anniversary.  Excellencies, on behalf of my fellow citizens, and in my own name, I would like to take this opportunity to thank you sincerely for this solidarity, goodwill and support for Liberia, President said.

Also there were a number of senior government officials representing their respective Heads of State and Government who expressed regrets that they were unable to join the celebration, due to other pressing duties of State.  To those, the President said, “We would also like to extend a whole-hearted welcome. We thank you for honoring us with your presence”.

The President extended thanks and appreciation to the National Orator, the Honorable Mawine Diggs, Minister of Commerce and Industry of the Republic of Liberia, for   her inspiring and thoughtful Address, which he said, has given us new insights into the importance of peace and unity in our Nation, and renewed our hopes for a better Liberia.

“I am personally very proud of you, Hon. Diggs, for your excellent Oration, because you brilliantly represented two of the most important demographics in our country: women, and the youth.  You have justified my confidence in the ability and unlimited possibilities of women and young people to make meaningful and significant contributions to the national discourse, and to fully participate in the leadership and management of our governance structures”.

The Liberian leader said he is sure that all of us who were under the sound of his voice would agree that the orator did justice to the official theme of this year’s Independence Celebration, as she articulated on the subject of:  “Fostering Unity, and Protecting Our Peace for Development and Prosperity”.

The President said the message was simple, understanding, relevant, and will resonate well not only with the women and youth, but with all Liberians.

“You used your personal story to demonstrate the importance of hard work and determination, as well as the importance of education in pursuit of one’s goals, and by so doing, you have given us much food for thought. I say to you, congratulations, and thank you very much”.