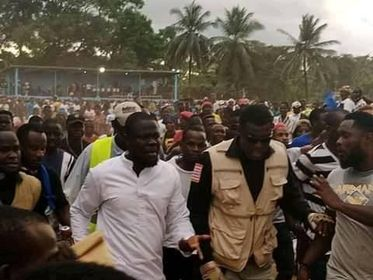 The by-elections for replacement of the late Munah  Pelham Youngblood in the House of Representative will be held on December 8, 2020, according  to the National Elections Commission (NEC).

He said it was due to the transparent process that allows the various candidates of the primary to accept the results without agitation.

“ By being a winner of this process does not means  that I am better  than  those people who did not win , I want you consider everyone of us as winners’’ he indicated.

Mr. Foko further appreciated those defeated candidates for the level of love peace and unity.

He used the time to call for reconciliation among all of the candidates’ supporters.

He said the primary is over and it is the party interest that needs to be protected.

Mr. Foko used the event to vow not to let his supporters and the residents of Montserrado County District #9 if elected as representative.

Also speaking  the Chairman of the Coalition for Democratic Change primary Jefferson Koijee  said  the party  allow its partisans  to make  the decision regarding  who  to represent  them not those from  the top during  the party’s  primary   unlike  the others.

He said the leadership of the CDC was proud of the ordinary partisans for making such a decision on who to contest on the CDC ticket for Montserrado County District #9 Representative By-election selected for December 8 2020.

The Chairman told the partisans that the CDC is not just a party but what he calls movement that will exist beyond their time of leadership.

At the same time, the observers of the various candidates expressed satisfaction over the smooth process.

“We don’t trust the police report”