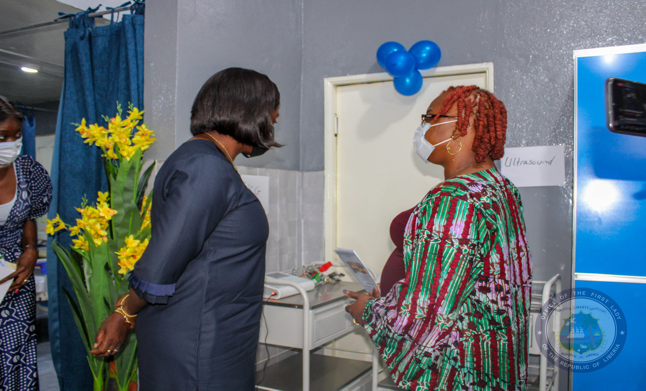 First Lady Clar Marie Weah says the country’s health sector is poised to experience continuing development in infrastructure and service delivery as a result of the importance President George Manneh Weah attaches to the health of the Liberian people.

“As President Weah constantly reminds us all, a healthy nation makes for healthy people, so the thrust of the health care pillar of the Pro-Poor Agenda for Prosperity and Development must see the rapid development of health facilities across the country with access to quality care and service delivery for our population,” Mrs. Weah asserted.

The Liberian First Lady was speaking Wednesday, May 25, 2022, at the Redemption Hospital when she officially dedicated and opened to the public the newly refurbished and rebranded adult emergency room, which was named in her honor.

She said that the modernization of the adult emergency room, which is a very important part of the hospital, and the fact that medical services are free at Redemption Hospital show that the Liberian government is taking another big step toward meeting the health needs of its people.

“Indeed, great things are happening in Liberia, with New Kru Town being no exception, and I am proud to be a part of it,” said Mrs. Weah, as she praised the leadership of Redemption Hospital’s Medical Director, Dr. Williametta S. William-Gibson, for undertaking such a wonderful initiative.

Mrs. Weah also thanked health workers across the country from the bottom of her heart, saying, “Our country continues to make firmer steps in the area of health care delivery because of your dedication and commitment, and I am grateful for that.”

The First Lady said that having the emergency room for adults named after her was “a great honor” for her and her family.

Mrs. Weah said that being honored in this way would encourage her to keep giving her time and energy to making the lives of the people of Liberia, especially the poor, better.

“I commit to you today that your kindness will cement our relationship and that it will see me do the best that I can, working even harder to change our nation by changing the lives of our people one day at a time.”

Dr. Gibson said that their decision was also meant to show how important it is for women to lead, since the First Lady is the best example of motherhood and leadership for women in Liberia.

At least 75% of the administrative positions in the hospital are filled by women.

When asked why the emergency room was changed, Dr. Gibson said that the terrible condition of the building when he became medical director was a big part of the reason.

According to her, though budgetary allocations to the hospital were low, she and her team were determined to give the facility a facelift not only for the patients but also for the health workers.

Redemption Hospital’s Medical Director thanked the Ministry of Finance and Development Planning and the World Bank, through its performance-based program, for supporting the refurbishment of the Clar Marie Weah Adult Emergency Room.

The Clar Marie Weah Emergency Room is a 14-bed capacity room with essential medical equipment including ultrasound, patient monitors, and an EKG. The ER is fully air conditioned, and contains a section to treat health workers who may fall sick.