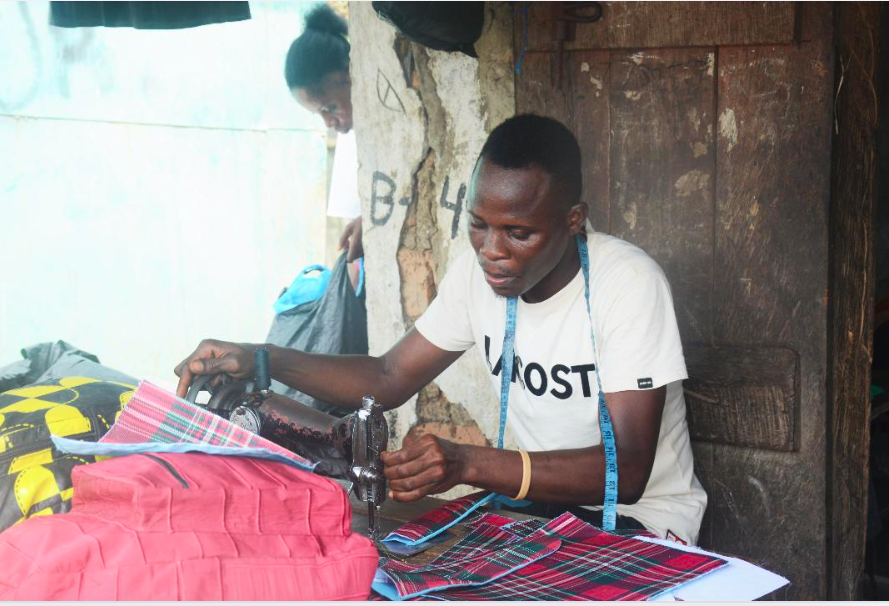 Liberia, Monrovia, June 28, 2022: Levi Flomo, 27, had a run-in with the law that changed his life. After a neighbor accused him of rape in January 2019, he wound himself in Monrovia Central Prison. In the end, he was held in pre-trial custody for more than three years until being freed in April 2022 when the state issued a nolle prosequi due to a lack of evidence.

He told UNDP in June 2022 that “Jail life is very bad.” It’s unfortunate, but everything happens for a reason.

He was one of the very fortunate pre-trial inmates who benefited from the skills training provided by the Liberian Bureau of Corrections and Rehabilitation (BCR), with assistance from UNDP and funds from Sweden and Ireland. Typically, convicted criminals receive this training to aid in their rehabilitation and reintegration into society after serving their terms.

He was one of the “nice guys” that were noticed to be in prison. He had no prior convictions, and he was eager to learn. Mr. Joseph G. Sumo, Coordinator of the Rehabilitation Centre of the BCR, described the young man as “a very privileged young man.”

Mr. Sumo continued, “We consider him a success story since he came to us with no skills and left with talents that he is utilizing to generate a living that will support his family.

His father, a tailor, had attempted unsuccessfully over the years to teach him the craft of tailoring, although he had received training in it. He has since made the decision to carry on his father’s legacy and is now employed by his tailoring company, where he specializes in creating a wide range of bags, including backpacks.

When my son, the only living kid I had, was arrested, I felt terrible. Mr. Daniel Levi Flomo expressed his regret at witnessing the man in such circumstances.

Despite being the third child in his family, Levi feels more like the first child because his two older brothers both passed away too soon. A six-year-old son of Levi’s currently resides with his grandparents. Levi is the child’s father.

During our visit to their business on Pipeline Road in Monrovia’s Paynesville neighborhood, Levi was accompanied by his parents, other siblings, and an uncle. He was optimistic and determined to use his newly acquired skills to make a living for himself and his son as well as supplement the income of the larger family.

The impact of this instruction on my life is indescribable. I was inspired by the success I witnessed in my friends who tried their hand at tailoring. He vowed, “I must now remain away from issues and concentrate on my new life.

In order to be reunited with his kid in December 2022 and be able to meet all of his needs, including his education, he wants to reinvest his tailoring money and save as much as he can.

Levi, like many other young men in Liberia, had dropped out of school due to a lack of school fees and was working as a motorbike taxi driver, a lucrative but risky job. Even worse, he had a mishap and broke one of his legs.

His worldview was altered by his incarceration. To the great satisfaction of his father, he claims that he is now content to create and deal in bags. The father added, “I am glad to have my kid back and very, very proud to be doing things together with him.”

Levi’s absence from home is regretted by both father and son, who fear reprisals from his accusers. The BCR was unable to actively assist in his reintegration back into his community because he was still a pre-trial detainee and had not been found guilty.

In the waterlogged premises of the tailoring shop, Levi is now sleeping on wooden work tables lined with carton boxes while fending off insects and mosquitoes. To change his life and the life of his family, he is, nevertheless, prepared to pay a price.

Liberia Democracy: The Pickle Of The Liberian Senate, Justice Ministry And...

“We didn’t manufacture the story”

Stealing power is illegal and criminal