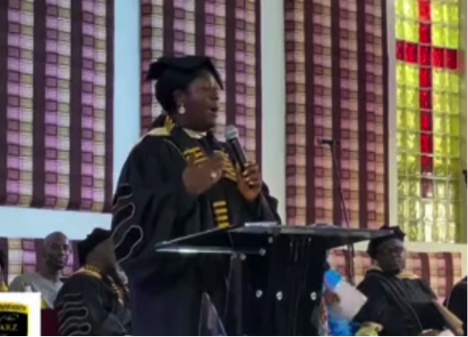 Over 20 females out of a total of 165 graduates of the Starz University on Tuesday, November 9, 2021, obtained bachelor degrees in Information Technology (BIT), Telecommunications Engineering (BEng) and Management Information System (MIS).

Delivering the keynote address at the 4th Graduation Convocation of Starz University, held at the Monrovia Christian Fellowship on 9th Street Sinkor, Commerce and Industry Minister Mawine G. Diggs called on the graduates to know their passion.

Minister Diggs told the graduates that if money is what motivates them, then they are going to be miserable and encounter more failure than success along the way.

Speaking on the theme: “Proactive leadership begins in academia,” Minister Diggs informed the new graduates that they are true representations and facilitators of democracy because of the level of education they have obtained at Starz University.

According to her, Doctor John Dewey, an American philosopher, sociologist and education reformer whose idea have been influential in education and social reform in the 19th century, emphasized that the role of higher education is to sustain the way of life.

She indicated that Doctor Dewey believes that knowledge equips ordinary citizens to share a common life, helping themselves as well as helping society.

She emphasized that in the world of academia, there are level playing fields, where social status does not determine success, and that academia provides a new space that allows one to identify their natural gifts and talents and also their abilities.

“So, when I look into the crowd today, I don’t see disable, smart or dumb. Instead, I see prepared faces, individuals who have embraced academia in order to find their gifts and talents to proactively engage and make a difference in society,” she said.

Speaking further, Minister Diggs said academia defines leadership as a process of social influence in which a person can enlist the aid and support of others.

She admonished the graduates that they are leaving the wall of Starz University because throughout the years they found something solid to stand on therefore the entire faculty and staff of the University have faith and trust in them to face the world.

The Minister of Commerce added that what makes a leader successful is the 80% of time within their zone of genius, emphasizing that one may be a good listener or a public speaker and that person is always prepared because that is what they do so well.

Meanwhile, Minister Diggs mentioned that many people believe that money makes life easier, admitting that although at certain point, people with such belief may be right, but pointed out that it is within the acquisition of money where the complexity lies, stressing that when you can probably and appropriately find your gifts and talents, coupled with education, you will never work a day but living your life.

“If you wake up every day and decide to give your best it’s not considered work but living your purpose and carrying out your passion thereby giving out the best of you to society. Everyone wants to be successful but are you prepared to face and recognize things, when preparation meets opportunity that is when success occurs,” she said.

She told the graduates that they have weathered the storm and graduated, but inquired from them as to whether they are ready or able to market themselves appropriately or are their curriculum vitae complete or does it reflect the best that they have to offer or can they recognize opportunity when it presents itself.

“You have shown commitment and confidence in yourself to achieve anything irrespective of difference and time. This class is definitely prepared for what is to come,” Minister Diggs said, admonishing the graduates to be ready and prepared to get opportunity when it presents itself and not only that but that they should be ready to answer questions that come with it.

She used the occasion to congratulate the graduates and appreciate the leadership of the University for selecting her to serve as keynote speaker.

Several AFL soldiers abscond while on training in U.S.