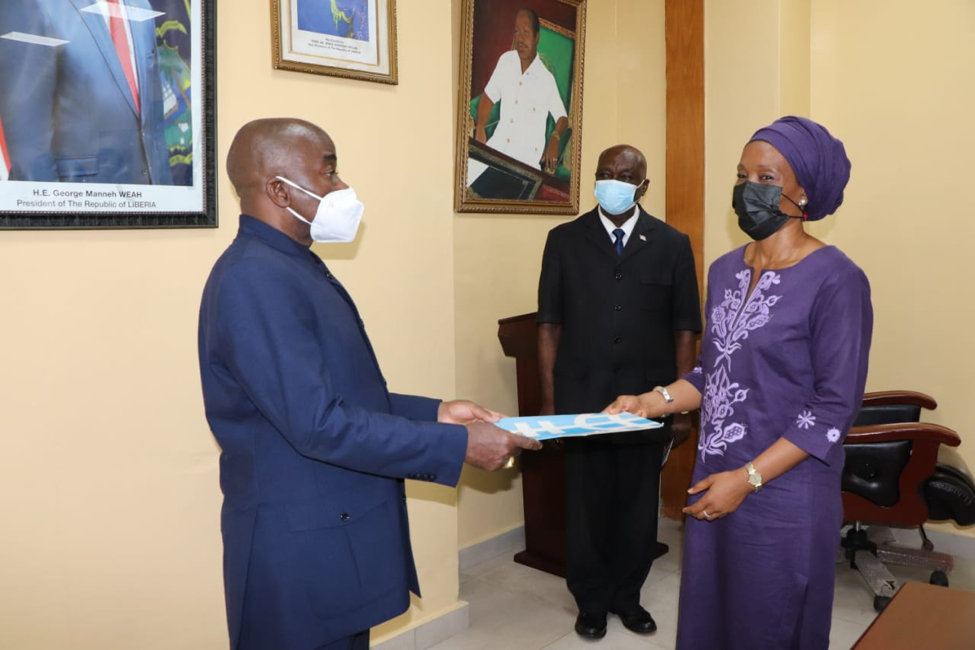 On Thursday, March 31, 2022, Comfort Lamptey, the new UN Women Country Representative in Liberia, presented her Letters of Credence to Minister of Foreign Affairs Dee-Maxwell Saah Kemayah at an official event in Monrovia.

Ms. Lamptey expressed her gratitude to the government and people of Liberia for the warm welcome she has received since her arrival by presenting her credentials. She described accepting an assignment in Liberia as an honor of duty that would allow her and the UN Women team to carry out the organization’s development operations while also empowering women and girls in the country. Ms. Lamptey, who served in Liberia a few years back as UNMIL Head of Gender Services, said she was glad to be back to continue the path of enhancing the capacities of Liberian women.

“Our work is to support the activities of the government in assisting women and girls to improve their standard of living. I can assure you of UN Women’s unflinching commitment to collaborate in all areas that would bring empowerment to our women and girls,” she said.

Ms. Lamptey has an established track record of working to promote women’s rights and gender equality at the regional level in Africa as well as globally. She has served in senior advisory and management positions with different UN entities in New York, Geneva, and countries across the Africa region. She has worked extensively on issues of governance, peace and security and has been instrumental in helping to establish the policy architecture on gender, peace and security in the context of UN peacekeeping. Prior to taking up assignment in Liberia, Ms. Lamptey served as UN Women’s Country Representative to Nigeria and ECOWAS.

In response, Liberia’s Foreign Minister congratulated Ms. Lamptey on her preference to serve as UN Women’s Country Representative in Liberia. Minister Kemayah highlighted the numerous contributions of UN Women to the welfare, development, and empowerment of Liberian women and girls. “UN Women has been working in a strategic manner since 2004 in close collaboration with the Government of Liberia in delivering as one through the UNDAF,” said Ambassador Kemayah.

He also underscored the commitment the government attaches to enhancing gender equality in Liberia as demonstrated by President George Weah’s role as Feminist-in-Chief who leaves no stone unturned for the women of Liberia.