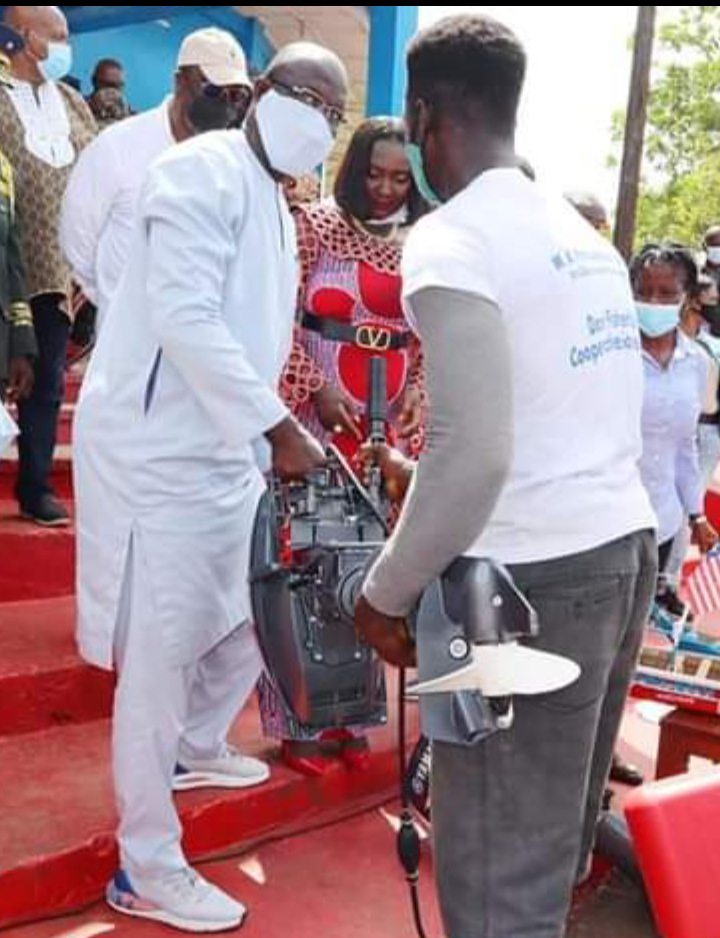 Liberian fishermen will shortly begin increasing their catch from sea and flood the local markets with fish and fisheries productions as the CDC-led government embarks upon distribution of free outboard engines donated by the Government and people of Japan.

The Fisheries Cooperatives which comprise fishermen, canoe owners, fish processors, fish sellers, safeguards and other fishing community residents/dwellers are drawn from the nine coastal counties in Liberia where fishing activities are on the increase.

President George Manneh Weah began the distribution of the first batch of outboard engines Saturday October 23, 2021 at a well-attended grand launch on the Fairground in from of the Unification Pavilion in the port city of Buchanan to 23 Fisheries Cooperatives from all the landing sites.

Making the presentation, President Weah declared that the donation which is first in its kind was his government’s assistance to Liberian fishermen across the country.

President Weah, who reminded the fishermen that he is a “Talk and Do President”, termed the donation as a promise fulfilled.

It can be recalled that in 2019, a Liberian delegation headed by President Weah visited Japan and negotiated among other things, for assistance for the overall development of the Liberian fisheries sector.

Upon the return of the Liberian delegation which had several others discussions with the Japanese government, Liberian fishermen were informed of a pending free outboard engines distribution across the nine coastal counties.

The outboard engines were anticipated in 2020 but they were delayed due to the outbreak of Covid-19 pandemic which affected the production of the engines.

Presenting an overview of the project, the Director General of the National Fisheries and Aquaculture, (NaFAA) described the grand distribution ceremony as an intervention by President Weah, which she said was intended to take the paddle canoes fishermen from “Paddle to Engine”, this she said “provides hope and empowers Liberian local fishermen thus putting them in a position to compete with their foreign counterparts.”

Madam Emma Metieh Glassco in addition stated that “we can now boldly say, in the words of my President, H.E George Mannah Weah that the fishermen of Liberia shall never be “Spectators in their own Economy” but active players’.

Briefing President George Weah and a host of government ministers, members of the Legislature including the Speaker of the House and the Senate Chair on Agriculture, members of the fishing communities, Glassco said ‘in keeping with the overall goal of this initiative, which is to boost fish production, increase local fishers’ daily earnings and supply the dietary protein needs of the Liberian population through the transitioning process of Paddle to Canoe initiative, hence, this distribution shall affect fishing cooperatives from all nine coastal counties of Liberia’.

At the same time, Glassco disclosed that the Cooperatives are harmonized framework comprising all actors in the sector, including fishermen, canoe owners, fish processors, fish sellers, safeguards and other fishing community and residents.

The Liberian fisheries expert stated that the concept of giving the outboard machines to fisheries cooperatives, instead of individual fisher folks, will ensure accountability and effective monitoring to measure the impact of this initiative over time, and to identify other areas of arising needs.

She also indicated that at the national level, the initiative of transitioning 600 paddling canoes to motorized canoes, will go a long way in narrowing Liberia’s import-export fish deficit gap of 33, 000 metric tons per annum, while increasing Liberians net per capita fish consumption which currently stands at 9.49Kg compared to the global per capita fish consumption of 23.5Kg.

Moreover, Madam Glassco explained how the current challenges being encountered in the Liberian Fisheries Sector, disclosing that “it’s been a long and challenging journey especially addressing plight of the masses of the fisheries workforce which constitute vast majority of Liberia’s population, given that, Liberia is endowed with water bodies of which fishing is a customary practice and traditional cultural norm of the society.”

Disclosing how the outboard engines initiative came about, the NaFAA boss revealed that in densely populated rural coastal areas such as Grand Bassa, Maryland and Grand Cape Mount Counties which she claims lack job opportunities, fishing provides alternative livelihood opportunities for their respective populations and “it was on this basis that we were able to present a strong case to our development partners for support and also considering that the full potential of the wealth of aquatic fish resources Liberia possesses is yet to harnessed.”

Additionally, she indicated: “today’s occasion is one of the benefits accrued from the President’s visit to Japan in August 2019, to attend the Tokyo International Conference on African Development, TICAD7 Summit. Our President, during his interaction with the Japanese authority, presented Fisheries as one of Liberia’s priorities for economic growth. She noted this was after they had previously engaged the Japanese Regional Office on possible interventions from the government of Japan for support to Liberia’s Fisheries sector, considering Japan’s longstanding bilateral relationship with Liberia evidenced by road infrastructure projects that they had supported.

She recalled, “I remembered vividly, at the regional fisheries ministerial meeting organized by ATLAFCO (Africa Ministerial Committee on Fisheries Boarding the Atlantic Ocean) in Abidjan, after a discussion with my counterparts on their gains and lessons learnt within the sector, I noticed that most of these countries within the sub region had attracted bilateral support from Japan, as such I used that same opportunity to request a meeting with the JICA (Japanese International Cooperation Agency) representative in Abidjan where they have their regional office to explore how our fisheries sector can attract same support.”

Speaking further, Madam Glassco mentioned that the Liberian fisheries delegation was extended an invitation to attend the Sustainable Use Meeting in Japan 2018, where it had the opportunity to meet the Japanese authorities responsible for fisheries and its related matters so as to attract their support through the strong cooperation of the Foreign Minister of Liberia at the time.

The Liberian fisheries boss said “the long and short of this story, is that, our project proposal was well received and approved and they were in two folds; the construction of a landing and storage site in Buchannan and the outboard motor engines. Both projects valued at 7.6M USD.”

She added, “a big thanks goes to my technical team who worked with the Japanese delegation on the three assessment trips to Liberia to consummate the proposal towards the approval of this project by the Government of Japan”.

Glassco commended President Weah for ensuring that the paddle to machines becomes a reality and for being the first Liberian president to focus attention to the fisheries sector particularly the local fishermen and fishmongers.

She also stated, “let me also recognize Hon. Bill Twehway for his support in allotting five acres for the port land here in Buchannan for the construction of this landing and storage fish facility which was a criterion for approval by the Government of Japan evidenced by the signing program on Monday Oct. 18th, 2021 which happened after the symbolic turning over ceremony of the Yamaha Outboard Engines.”

We are deeply troubled by the stigma the Children are facing...