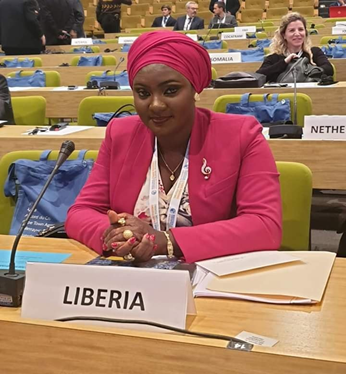 The Director General of the National Fisheries and Aquaculture Authority (NaFAA), Madam Emma Metieh Glassco is selected to serve as speaker at the International Maritime Organization (IMO)-United Nations Webinar on the Ratification and Implementation of the 2012 Cape Town Agreement that speaks to the safety of fishing vessels above 24 meters.

Madam Glassco will speak on the topic “Effect of Fisheries Management Policies on Fishing Safety”.

According to a NaFAA press release during her presentation the Liberian Fisheries boss is expected to highlight the benefit to be accrued through the application of hard and effective fisheries management programs and policies.

The NaFAA release added that Madam Glassco’s emphasis will be on ensuring compliance of these hard management policies to serve as deterrence and promote safety at sea in support of the 2012 Cape Town Agreement.

The 2012 Cape Town Agreement (CTA), which has been adopted by the IMO, replaces the Torremolinos Protocol of 1993 on the safety of fishing vessels.

This convention mirrors the International Convention for the Safety of Life at Sea (SOLAS), an internationally binding treaty on safety for merchant vessels, of which Liberia is a contracting party that entered into force since 1980.

The CTA when entered into force by the ratification or accession of 22 states and 3,600 eligible fishing vessels, will set the minimum requirements on the design, construction, equipment, and inspection of fishing vessels 24 meters and above that operate on the high sea. Until the CTA enters into force, there are no mandatory global safety regulations or standards for the safety of fishing vessels at sea.

Most recently, in 2019, Liberia, through NaFAA under the forward-looking leadership of DG Glassco, acceded and ratified the Port State Measure Agreement (PSMA) – FAO’s United Nations fisheries instrument to ensure legality and safety of fishing operations. She has also been able to strengthen NaFAA’s legal regime with the passage of a new Fisheries and Aquaculture Management and Development Law and acceded to many other international protocols in this regard.

Considering Liberia as a leading maritime nation with the second largest open registry, it is required of her to take the lead in these discussions building on the gains made.

Meanwhile, Liberia is currently reviewing the possibilities of ratifying the CTA.