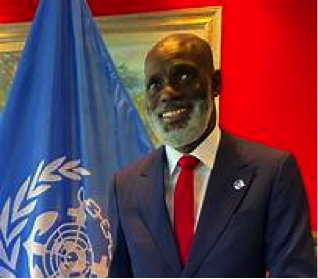 The Commissioner of the Liberia Maritime Authority (LiMA), Eugene Lenn Ngabe, has been trumpeting achivements of the Government of Liberia (GoL), under the reign of retired soccer star George Weah.

He stressed the that void of politics and in good fate, for Liberians to acknowledge what he calls the good style of leadership of the ruling Coalition for Democratic Change headed by President Weah

He recounted some of government’s achievements, while highlighting the newly constructed LiMA building, which he said is expected to be shortly dedicated; the Headquarters of the National Port Authority (NPA), and Headquarters of the Liberia Petroleum Refining Company (LPRC).

“The realities are there to see, look at the new size of our national budget, it didn’t come by accident. We are realistic budgeters and we may exceed the budget that was recently presented by Minister Samual Tweh,” Nagbe bragged.

He also highlighted, as part of the GoL’s achievements, the Ganta to Saclepea Road rehabilitation, saying, the Government is making progress despite the withdrawal of the United Nations Mission in Liberia (UNMIL) and the outbreak of the health crisis.

He noted the progress being made by the GoL is not as a result of magic, but as a result of [the innovation of ]President Weah, along with his team, who he said are putting in efforts to increase revenue and to cut down waste in spending.

“The President believes in tangibles and not mere talks, and as you can see, it has been manifested in the national budget. The IMF will by end of this month, publish the report of Liberia where you yourself will see the increase in GPD growth that shows that we are critically managing the country” Nagbe further bragged.

“With the publication of the report, some of the unnecessary noise has to stop, evidence based is glaring. And this comes at the time when there is no UNMIL that was injecting two million dollars into the economy directly, yet we are pushing and we will continue to make progress and deliver,” he added.

For his part, President Weah, who officially dedicated the new Headquarters of LISCR at an elaborate ceremony in Sinkor, Monrovia, said the new modern facility of the LISCR will facilitate the crucial work of the institution on behalf of the GoL.

“I am glad to be here today at the opening of the new Headquarters that will house the Liberian International Ship and Corporate Registry (LISCR). It is my expectation that these modern premises will help facilitate the crucial work that LISCR does on behalf of the Government of Liberia (GoL),” he said.

The Liberian leader continued: “Liberian Registry, as the fastest growing registry in the world and second largest for the fleet of vessels to fly the Liberian flag, speaks to the works of LISCR.”

With the many challenges faced by the institution, President Weah acknowledged that it continues to make significant contributions to the growth of the Liberian registry.

The Liberian Chief Executive, delighted by the state of the act facility, at the same time encouraged the Liberia Maritime Authority (LiMA) and LISCR to remain firm while seeking more attraction internationally to boost revenue generation locally.