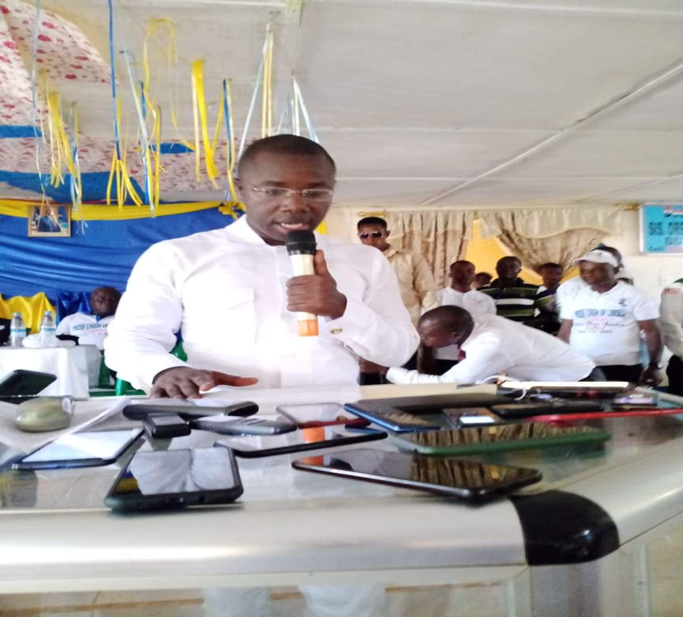 Jefferson Tamba Koijee, the Mayor of Monrovia, has made a critical assessment of press freedom and urged the media and the Liberian government to work together to promote common principles that are necessary for peace, democracy, and development.

On Tuesday, May 3, 2022, he delivered these remarks as the keynote speaker at a celebration commemorating the 2022 World Press Freedom Day (WPFD) in Fish Town, River Gee County.

The Liberian Press Union (PUL) joined fellow journalists from around the world to commemorate World Press Freedom Day with the subject “Journalism under Digital Siege.”

WPFD is a day that was set aside to be observed by journalists around the world.

Delivering his keynote address, Mayor Koijee told journalists that as they celebrate this year’s WPFD, it is their responsibility to remain ethical, emphasizing that the media, as a double-edged sword, can be a frightful weapon of violence when disseminating messages of falsehood that cunningly sway public sentiments.

Mayor Koijee, meanwhile, made several recommendations aimed at promoting a free press and democracy in Liberia. At the time, the Major expressed grave concern about what he called politicians’ increasing ownership of media institutions, describing it as a threat to independent media.

He also recommended that an independent body, preferably a board or committee, comprised of citizens with the moral rectitude and integrity, technical expertise, and experience to serve as a watchdog over the media since the media serves as the watchdog of society;

He wants PUL to strengthen its measures on journalists and media practitioners who use their platform purely for political motives in gross disregard of their ethical responsibilities, thus compromising their independence.

The Major also suggested that the PUL set up a PUL Media Council on Waste Management to work with city governments in all of the 15 counties and sensitize their populations on the need to take responsibility for waste that could become a national health and security threat.

The young politician recommended that the President of Liberia appoint a Special TRC Report Board led by the PUL and civil society representation for the full implementation of the TRC Report so that a War Crimes Court and an Economic Crimes Court will be eventually set up to ensure that impunity in the land is addressed and discouraged forever.

However, he indicated that the media can be an instrument of conflict resolution and peace, adding that “this is the kind of media that enables a society to make well-informed choices, which is a forerunner of democratic government and values.”

He named several veteran journalists, including Kenneth Y. Best, Philip P.N. Wesseh, Weadeh Kobbah Wureh, Frank Sainwola, and Peter Quoiquoi, for their roles and contributions to the free press, media pluralism, and democracy in Liberia, which remain a mark of distinction, greatness, and an example that is worth emulating.

“I cite myself as an example of someone that the media has allowed itself to be used to victimize by negative, false, and unhealthy stories. There is a plethora of false allegations against me, ranging from calling me a former child solider, death squad commander, rapist, and other violent acts against innocent people, “he said.

Speaking further, the City Mayor of Monrovia claimed that it is the media that allows itself to be the instrument of the spewing of falsehoods and lies.

However, he mentioned that transparency and accountability of the digital media is very important as it refers not just to excellent and independent reporting but also self-examination, stressing that as much as the government has a duty to ensure a free press, the media also has a duty to responsible reporting.

He noted that utilizing the media landscape for anything less than promoting high standards of journalism would set the stage for unprofessional and biassed coverage or reporting, which could lead to maligning of innocent people’s character and causing national hate and tension, urging that the media must never allow itself to be used.

Mayor Koijee highlighted that the background of the theme for this year’s WPFD pivots on the fundamental principles of press freedom and rekindles the memories of fallen journalists who have lost their lives in the execution of their ethical and reportorial duties and from other causes.

According to him, River Gee County and the South-east have also been stronger partners in the promotion of free speech and the perfection of journalism in the country, and many sons and daughters of this region have contributed to the development of journalism and have also served the PUL with the utmost honor and respect, adding dignity to the PUL which it holds today.

Today we must remember the great services of the sons and daughters of this region in the promotion of free speech and of the press. Your decision to bring this celebration to the heart of the Southeast means you have handed huge dignity and respect to the people of this region who are contributing to the development of this noble profession, “he asserts.

Meanwhile, emphasizing on the WPFD theme, Mayor Koijee said that digital siege can become a serious threat to journalism and the democratic setting. As such, the increased use of the digital landscape since the Corona pandemic demands government responsibility to ensure that access to available information will not be censured or hampered.

He maintained that researchers and digital rights groups say around the world that digital siege has become an increasingly popular tactic of repressive and authoritarian regimes and some undemocratic settings. Therefore, regimes often cut online access in response to uprisings or civil unrest, particularly around elections, as they try to keep their grip on power by restricting the flow of information, emphasizing that under the free and open administration of President Weah, access to online services is not monitored and has contributed to the flourishing of media freedom in the digital environment.

“The intimidation and brutal attacks against several journalists cannot be forgotten. The government and the media have a symbiotic relationship like the teeth and tongue and must coexist for the betterment of our common patrimony and democracy. “There is a need for mutual respect and collaboration to promote national development and unity,” he said.

The City Mayor of Monrovia used the event to urge agencies of government to desist from lip service and take concrete action to redress cases of brutality by state security forces.

He therefore pledged the government’s commitment to support the PUL to work against digital siege in Liberia, emphasizing that the independent media in Liberia is faced with another kind of threat which is coming from the ever-increasing political ownership of the media in Monrovia and across Liberia. As such, with the rise of the digital age, the PUL is at a crossroads.

Mayor Koijee said he is grateful that the PUL chose him to serve as keynote speaker at the occasion, emphasizing that coming to Fish Town is a genuine extension of the PUL outreach initiatives to the nukes and crannies of the country.

Making the presentation to the President of the PUL, Charles B. Coffey, Jr., the Deputy Minister of Information for Public Affairs, Jalarlawah A. Tonpo said the presentation by the Liberian leader is in no way for the media to baffle their professional reportage. The amount was presented onward by the Superintendent of the county to the PUL President.