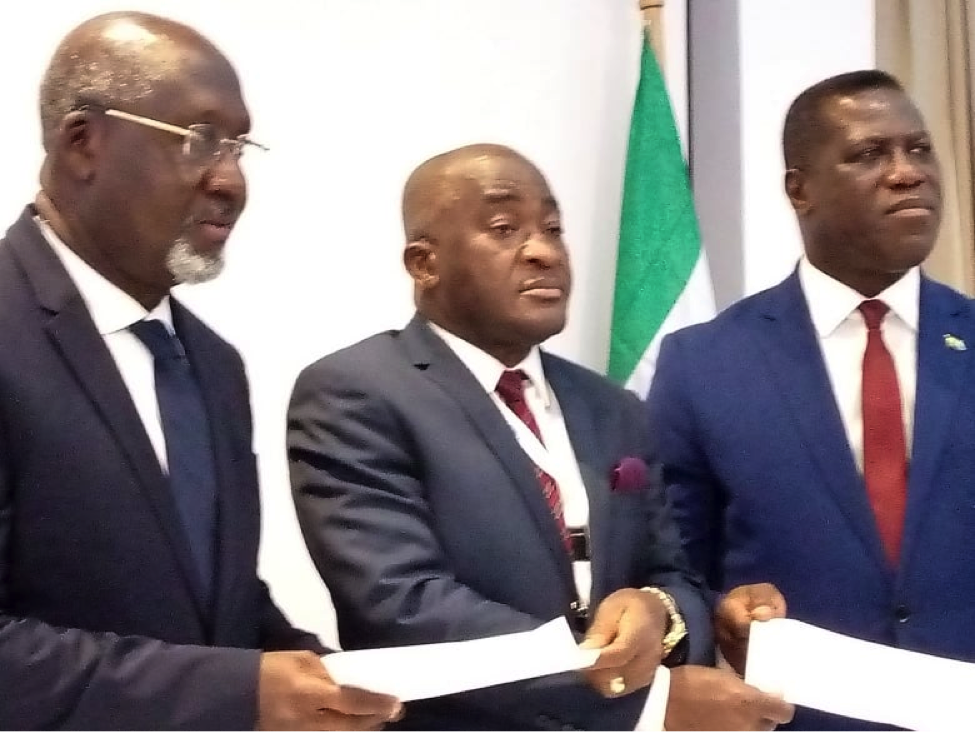 MONROVIA – Three out of the four-country Mano River Union (MRU) countries; Liberia, Cote d’ Ivoire and Sierra Leone, at the end on a rigorous two-day of intensive deliberations at a Diplomatic, Peace, Security and democratic confab, have signed a peace pact regarding restoring political stability to member-country Guinea.

Guinea President Alpha Condé, on 5 September 2021, was captured by the country’s armed forces in a coup d’état after gunfire in the capital, Conakry. Special forces commander Mamady Doumbouya released a broadcast on state television announcing the dissolution of the constitution and government.

In view of the military takeover in Gunea which has created a political stalemate in that MRU country, the Secretariat of the Mano River Union convened a special Mano River Union Diplomatic, Peace, Security and Democracy Conference on the political situation in Guinea at the initiative Liberia’s President Dr. George Manneh Weah, who graced the occasion by delivering the keynote address.

The conference was hosted by the Minister of Foreign Affairs of the Liberia, Ambassador Dee- Maxwell Saah Kemayah, Sr, at the Farmington Hotel in Margibi County, Liberia from November 22-23, 2021, who welcomed the guests, while the MRU Secretary-General H.E. Amb. Medina Wesseh gave the overview.

The conference adopted the form of separate closed door working sessions of Foreign Affairs Ministers, Defense Ministers and Chiefs of Defense Staff, and during the open and closed door consultations, the participants reiterated their grave concerns about the political situation in Guinea, particularly the unconstitutional removal from office of a democratically elected government, and thereby endorsed and reaffirmed the common position of the Economic Community of West African States (ECOWAS) and the African Union (AU) and pledged support and commitment to the ECOWAS process and transition road map in Guinea.

The conference commended the relentless efforts of Ghanaian president Nana Addo Dankwa Akufo Addo, Chairman of the Authority of Heads of State and Government of ECOWAS to bring about a peaceful and amicable resolution of the situation in the Guinea.

The Conference welcomed the pronouncements and commitment of the National Transitional Council of Guinea to restore constitutional order and return power in the shortest possible time, with delegates at the 22-23 November confab further noting with keen interest the focus of the National Transitional Council to fight corruption, initiate reforms and strengthen institutions to sustain an irreversible transition to democracy, governance and constitutional rule in Guinea.

The Conference then adopted with great appreciation the policy framework and guide outlined in the keynote address of Liberian president Dr. Weah, who observed the historical threats to the peace, security and stability of the sub region and commended the MRU in its attempt to foster closer working relations with ECOWAS, AU, UNOWAS and other partners to revive the 15th Protocol of the MRU on Peace, Security and Defense; and that this MRU-ECOWAS collaboration should also support conflict management, resolution, peace building and political transformation in Guinea as an added impetus to the proposed revision of the ECOWAS supplementary protocol on Democracy and Good Governance of 2001.

The Conference also adopted the proposal of President Weah where he called for a merged ECOWAS – AU – MRU Mission to be supported by the UN Peace Building Commission Fund and other international partners, which should be established to support the ECOWAS mediation effort in the current Guinean transitional arrangements being undertaken to prepare Guinea for democratic Elections and the return to Constitutional order.

During deliberations, MRU General Madam Wesseh was called upon to reach out to ECOWAS, AU, UN, United Nations Peace Building Commission and other partners to foster stronger and more active partnership in peace building initiatives for the MRU, and specifically for its engagement in Guinea.

In addition, the participants resolved that the National Committee for Reconciliation and Development(CNRD) be encouraged to comply with the ECOWAS transition roadmap, and to establish a clear process of transition; setting a timetable for the holding of free, fair and transparent elections and restoration of constitutional order, and that the MRU engages the leaders of the National Committee of Reconciliation and Development (CNRD) in Guinea as well as ECOWAS in order to develop a framework for the return to constitutional rule.

The participants also resolved that ECOWAS, AU, UNOWAS and the Kingdom of Morocco serve as moral guarantors of the MRU’s complimentary supportive role of ECOWAS’ Agenda in Guinea, and among others, that a Joint Mission comprising the Ministers of Foreign Affairs, Ministers of Defense, Chiefs of Defense Staff and the Secretary General of the Mano River Union (MRU) pay a visit to the Republic of Guinea as  early as December 2, 2021 before the next ECOWAS Summit which convenes on December 12, 2021;

The Conference expressed deep and profound thanks and appreciation to President Weah of Liberia for the vision, which led to the MRU Secretariat, under the able leadership of Ambassador Medina A. Wesseh, in collaboration with the Liberian Government through the Ministry of Foreign Affairs to have organised and hosted the Mano River Union Diplomatic, Peace, Security and Democracy Conference.