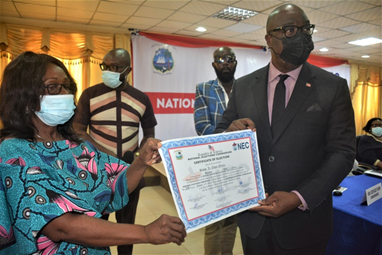 This follows the reading of the mandate from the Supreme Court of Liberia affirming the decision of the Board of Commissioners of NEC declaring Hon. Snowe, as Senator of Bomi County.

The colorful program was held today Monday, 22 February 2021 in the James M. Fromayan Conference Hall at the Headquarters of the Commission on 9th Street in Sinkor, according to an NEC press release.

Performing the certification ceremony, the Chairperson of NEC Davidetta Browne-Lansanah said though the Commission announced winners in a number of other counties, those winners will not be certificated until complaints filed against the process are fully disposed of.

This, the NEC Chairperson said is in line with the decision of the Supreme Court of Liberia in the case Congress for Democratic Change, CDC versus the National Elections Commission, NEC, in 2015.

Making remarks during the certification ceremony, Snowe vowed that as senator of Bomi, he would serve as an advocate for the Commission to ensure the timely release of needed funds to the NEC to enhance the workings of the Commission, including the speedy adjudication of electoral matters.

Senator Snowe described the conduct of the 8 December 2020 Special Senatorial Elections as free, fair and credible; with the little resources provided to the Commission. The NEC boss, for her part, used the occasion to assure the public that as soon as electoral cases are adjudicated the winners will be certificated without any delay.

Amid dwindling economy, COVID-19: Lawmakers begin chopping another US$15k, but…