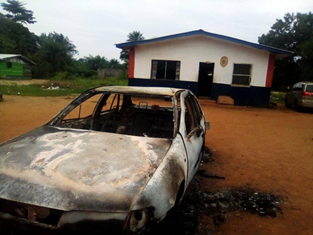 Eyewitnesses’ account have it that Massally was stabbed to death allegedly by a police aide only identified as Sackie, who the eyewitnesses say is a dismissed agent of the Liberia Drug Enforcement Agency (LDEA).

Felix Lawrence, who identified himself as a brother to the deceased 22-year-old, told WVN in Marshall City moments after the incident occurred that his brother’s death was as a result of mistaken identity, following a melee that ensued over the alleged partial distribution of food ration from the Government of Liberia and World Food Program (WFP’s) COVID-19 stimulus package.

At about 12 AM on the fateful day Massally was stabbed to death, residents of Marshall City were alarmed when news broke that food items intended for targeted residents of the City enumerated by some WFP staff, the WFP sub-contracted team of distributors, some community leaders, and officers of the Liberian joint security including officers of the Liberia National Police (LNP), allegedly opened the ware house where the food items were stored with the intent to take away the food unauthorized, one eyewitness told WVN.

The eyewitness narrated that this took place after the team of distributors had on the previous day distributed food ration to residents of Marshall City, and had exhausted the total persons enumerated to receive the COVID-19 stimulus package and the balance of the food ration was then stored in the warehouse.

Another eyewitness divulged to WVN that the team of distributors put a halt to the process of distribution by 5 PM on Thursday 18 February, indicating that those enumerated to benefit the food ration had been exhausted – thus, the distributors along with some community leaders said they were placing the remainder of the food items in the warehouse located at the Marshall City Hall.

But to the surprise of many residents of Marshall City, the eyewitness added, at about 12 AM the next day, it was observed  that  the warehouse having the food items stored in it was opened, making the residents to alarm.

The eyewitness said when the alarm was raised particularly by youth of the area, a male identified only as Chris, who is said to be the head of the LNP Women and Children Protection Service at the Liberia National Police station in Marshall City, allegedly remarked to one resident of the area that because they (residents) are not united as residents of Marshall, “so the people will carry the food back.”

WVN is informed that tension flare when youth of Marshall City intensified their agitation upon hearing that remainder of the food items in the warehouse were being shared among three groups, including the youth, 90 bags of rice; 30 bags of rice for joint security officers; and 40 bags of rice for members of the private security guard service, Pilot Security, and others who did voluntary work, so as to ensure peace was maintained in the area.

Another eyewitness said while efforts were being exerted to calm the crowd of agitating young people, tussle broke out between the youth and the government assigned security forces in the area over alleged attempt by the security forces and the WFP hired distributors to take away some of the food for personal reasons.

At this point, the eyewitness informed WVN, it was how the deceased, who had returned from buying cold water meant for drinking, and was said not to be a part of the agitating youth was mistaken to be among the aggrieved youth and he was allegedly stabbed by the dismissed LDEA agent, who is said to be on the run,

“My brother was not part of the  youth  who I was advocating for , he went  to buy water and met  friends sitting under  the tree behind  the City Hall  and four of the officers were running after  the youths, that was  how the officer  engaged my brother  who was not a part,” said Lawrence, who added, “I was informed that the guy who did the act is one Sackie, a former Liberia Drugs Enforcement [Agency] officer who is a police helper.

Following the stabbing of Massally, WVN is told angry residents of Marshall set ablaze a vehicle belonging to the police commander in the area.

When WVN contacted the City Mayor of Marshall City, Robert Williams, told our reporter that he could not respond because police is investigating the incident   and he is awaiting the outcome of the investigation by the police before officially addressing the media.

City Mayor Williams disclosed that police officers assigned at the Marshall City police depot have been recalled to base at the LNP Central Police Headquarters on Capitol Hill, Monrovia, adding that police authorities have reassigned a new batch of LNP officers at the depot to take over for now.

But when our reporter visited the Marshall police station, it was observed that not a single police officer was in sight, even though the building housing the depot was open.