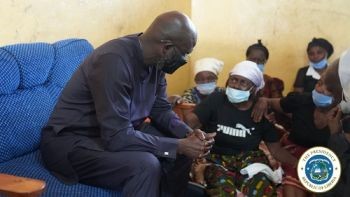 The Liberian leader has averred that the passing of Mr. Nyenpan is a big blow not only to his family but also to the government and the people of Liberia.

“The death of Mobutu hurts everyone. It hurts me as it hurts the family.” President Weah said, adding, “Indeed, Vlah was a father, brother, son and uncle to many. For me, he was more than a cabinet minister in my government. He was also a true friend and brother.”

The Liberian leader made these statements Sunday, November 8, 2020, when he and a throngs of government officials paid a visit to the family home of the fallen Public Works Minister.

President Weah used the visit to extend heartfelt condolences to the bereaved family on behalf of his government, and called on the family to look up to God during their difficult time of mourning.

The three kinsmen earlier welcomed President Weah and entourage to their family home and commended the Liberian president for his intervention and assistance during the critical period of the late Nyenpan’s ailment both in Liberia and in Ghana.

“If you were God who gives life, my brother Mobutu Vlah Nyenpan would be alive today”, Ojuku Nyenpan said in reference to the President’s intervention.

“Your time on the phone with me, Mr. President, finding ambulance and instructing Dr. Brown to do whatever possible to save my brother’s life still reverberates in my mind,” he said further.

Before his demise, fallen Minister Nyenpan also served as Senator of Sinoe County. He was honored as Minister of the Year 2019 by Dr. George Weah for his hard work and dedication to duty.