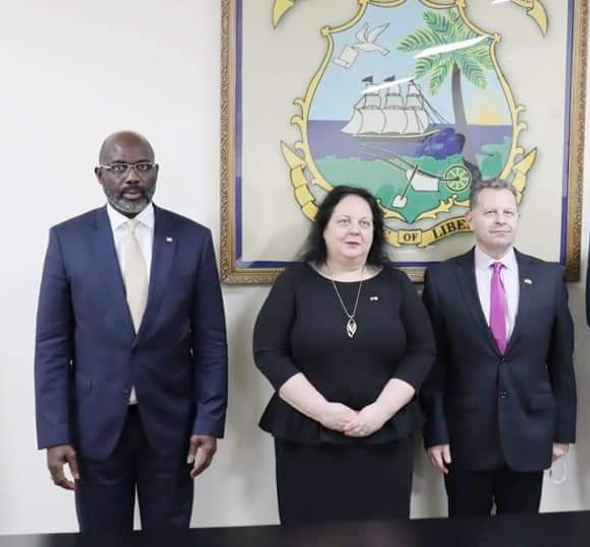 Monrovia, Liberia – The Ambassadors of the Republic of Japan and the State of Israel today, March 18, 2022, presented their Letters of Credence to the President of the Republic, H. E. Dr. George Manneh Weah at the Cabinet Room of the Executive Mansion.

It is the first time that President Weah received Letters of Credence from any Ambassador at the Executive Mansion, the official seat of the Liberian Presidency, since he moved there on February 14, 2022, from the Ministry of Foreign Affairs.

In presenting his Letter of Credence to the Liberian Leader, Japanese Ambassador Extraordinary and Plenipotentiary, Mochisuki Hisanobu, expressed sincere appreciation to the President for the excellent reception accorded him and team upon arrival at the Executive Mansion.

Ambassador Hisanobu used the occasion on behalf of the Emperor and Prime Minister of Japan to empathize with Liberia and President Weah for the devastating effects of the Corona Virus Pandemic on the country.

He also hailed President Weah’s tireless efforts in upholding and strengthening bilateral ties between Liberia and Japan evidenced by what he called President Weah’s participation in the Tokyo International Conference on Africa (TICAD) held in Japan in 2019.

According to Amb. Hisanobu, the President’s successful participation in TICAD has largely elevated the cooperation subsisting between the two countries to an excellent level.

He stressed that the cooperation between Liberia and Japan focuses on infrastructural, agricultural, and human developments.

The new Japanese Ambassador said Japan greatly anticipates President Weah’s participation in this year’s edition of TICAD, which he said is scheduled to take place in Tunis, Tunisia.

Ambassador Hisanobu reflected on Japan’s involvement with Liberia’s development programs, while also expressing sincere appreciation to President Weah for the level of cooperation the government demonstrated in the construction of the Somalia Drive Road, which is now the Japan Freeway.

“We are grateful to the government and people of Liberia for naming the newly built road, Japan Freeway,” the Japanese Envoy stressed.

He added that Japan was equally grateful for the cooperation between the two countries and expressed hope that such cooperation be further strengthened for Liberia and African development.

Ambassador Hisanobu hoped that Liberia and Japan can also endeavor to foster closer ties on greater economic matters for the common good of their respective peoples.

He assured President Weah that he would do his best to improve and strengthen his country’s ties with Liberia in whatever way possible.

In remarks, President Weah said he was extremely pleased to receive the Letter of Credence from the new Japanese Envoy, adding “I note the kind of cordiality extended to me and sentiments expressed.”

The President expressed gratitude for the long-standing relationship subsisting between the two countries, most especially Japan’s contribution to the social economic wellbeing of Liberia and its people.

President Weah highlighted several development interventions that Japan has made in Liberia, including the completion of the Somalia Drive Highway, now Japan Freeway and the construction Gobachev and Duala Markets.

“You are a true friend to Liberia,” President Weah says of Japan, while assuring the Ambassador of his government’s cooperation in ensuring that his stay in Liberia is successful.

In a related development, the new Ambassador Extraordinary and Plenipotentiary of Israel, Ms. Shlomit Sufa, also presented Letters of Credence to President Weah, thanking him for the warm reception accorded her.

She recalled how Liberia and Israel have enjoyed excellent friendship over the years, indicating that Liberia played a pivotal role several years ago in the formation of the Israeli state.

She said such support was vividly shown at different international forums, mainly at the level of the United Nations and African Union.

“For this level of cooperation and support, the people of Israel are full of gratitude for Liberia,” Amb. Sufa asserted and added that Israel was happy to reach out to Liberia, supporting the government’s flagship development agenda, Pro-Poor Agenda for Prosperity and Development (PAPD).

Recalling President Weah’s visit to Israel and his request for Israel’s technical support to the country, she said at the behest of her government, several Liberian students are undergoing technical studies in the field of Agriculture in Israel.

The students, she added, will contribute to Liberia’s prosperity if they return, and this is an example of how Israel is helping the government realize its development agenda.

Amb. Sufa also recounted her predecessor’s relentless efforts in resuscitating the country’s health and pledged to continue in a similar path.

For his part, President Weah expressed satisfaction over what he called “very cordial and long-lasting relationship existing between our two countries.”

The Liberian Leader also recalled the historic role Liberia played at the United Nations in bringing the State of Israel to being.

“There have been enormous exchanges of high-level visits of our officials which have resulted in the signing of Communiques and agreements evidenced by the strengthening of our bilateral ties,” he noted.

“You may be aware of our national development plan, the PAPD, which is our development roadmap aimed at making Liberia hit its development targets such as roads, ports, telecommunications, as well as health, education and agriculture,” President Weah added.

He informed the new Israelites envoy that Liberia now needs Direct Foreign Investment (DFI) that will help create jobs and put the country on a sustainable development basis, stressing “We want to solicit your government’s support to the PAPD.”

“Liberia’s new agenda to do business as part of the value chain is forestry, oil palm, fishing, coffee, and cocoa which will lead to the creation of more jobs,” President Weah noted.