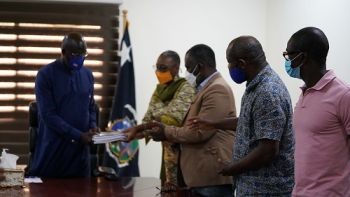 President George Manneh Weah, has reiterated his commitment to fight corruption as vigorously as possible in order to meet the growing hopes and aspirations of Liberians for socioeconomic transformation.

The Liberian Leader gave the assurance on Friday, November 6, 2020, when integrity institutions in the country presented him the final dossier derived from the National Anti-Corruption Conference held recently.

The resolution contains recommendations, strategies and methods to combat corruption in the Liberian public sector.

“I pledged my unflinching and unwavering support to you in the fight against corruption,” President Weah asserted as he received the document. “I have no doubt that this document represents the will of the people and it will be implemented to the fullest.”

Commending members of the integrity institutions, the Liberian Chief Executive said, “You did exactly what Liberians demand and we will support this endeavor to the fullest.”

The Chief Executive noted that it would require working with other branches of government in reforming the laws of this country towards achieving the task of battling corruption and graft.

On September 7-9, a national conference aimed at enhancing the fight against corruption was held in Monrovia and subsequently extended to other parts of country in October.

The Auditor General of Liberia, Madam Yusador Saadatu Gaye, presented the strategy document to President Weah on behalf of the integrity institutions.