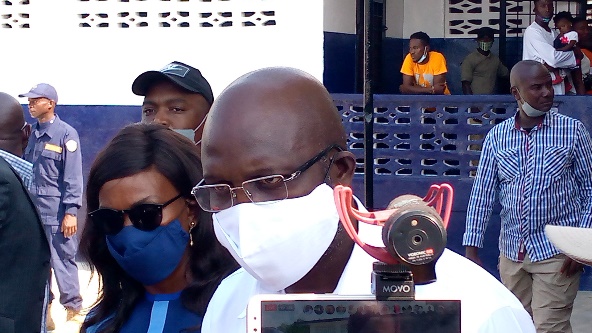 President George Weah has called on Liberians to do away with acts that have the propensity to cause violence during the Special Senatorial Elections and two Representative by-elections held on Tuesday, December 8, 2020, along with a National Referendum.

December 8, 2020, Liberians across the 15 counties troop in their numbers to the various polling centers to cast their votes for candidates of their choice to represent them in the Senate and to fill in the two vacancies in the House of Representatives caused by the death of two members of the Lower House including Montserado County Representative, Munah Pelnoh Youngblood and Sinoe County Representative, J. Nagbe Sloh.

Among the voters was President George Manneh Weah on Tuesday December 8, when he went to cast his ballot at the Kendeja Public School, located in Montserrado County Eelectoral District #6.

After he voted, the Liberian leader described the electoral process as peaceful and urged his fellow compatriots not to engage in act that has the potential to disrupt the peace, stability, and progress of the country.

“The Elections is a smooth process. My wife and I just voted. This is what we want to see and for Liberia to remain peaceful,” President Weah noted.

He then expressed the hope that the elections and the referendum would be held in an atmosphere of peace and serenity across the country.

“As I said, representing your political party candidate here as a poll watcher, please note that the process is a transparent one, you need not to agitate. Poll workers just need to observe and follow the process, as everyone has been watching,” President Weah added.

The President was elegantly dressed in a white outfit while his wife was perfectly attired in a blue outfit as they walk towards the voting center.

Also speaking to our reporter, an elderly woman, believed to be in her 60s, Joyce Dorbor, said the process from her observation was peaceful at the Kendeja Public School.

Madam Dorbor encouraged Liberians to always participate in such nationalistic venture by voting for the best a candidates in the serve the best interest of the country.

She narrated that elections are part of constitutional issues that need to be respected and promoted.

Also speaking to this reporter was Mary Flomo, a business woman, who disclosed that the huge turnout of Liberians for participation in the elections and the referendum clearly shows that Liberians are interested in the democratic process of the country.

She told our reporter that the peaceful process of the elections indicates that the country is consolidating its peace democracy.

Our reporter who visited various polling centers across Paynesville in Montserrado County such as electoral Districts #3, 4, 5 and 6 observed that those centers had long cutes with both male and female voters were delighted relative the electoral process.