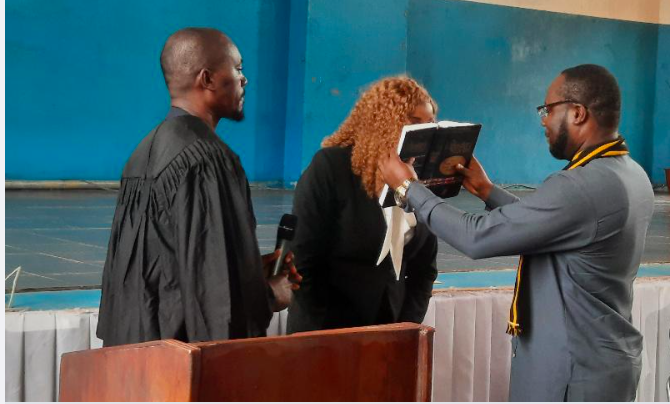 On Friday, July 15, 2022, the Law Students Association (LAWSA) of the Louis Arthur Grimes School of Law swore in Madam Williamina Gbardee Elious-Budy as president to manage and oversee the activities of student governance at the law school.

The only law school in Liberia, Louis Arthur Grimes Law School, was founded in 1951 and named in honor of its founder and former chief justice of the republic by an act of legislation. It started operations in 1954 and has since graduated some of the best lawyers in Liberia throughout the nation, but no female leader in its student politics because students’ political activities were frequently hidden from view.

The female president of the Law Student Association has vowed to uphold the law and advance the welfare of the campus’s students.

She listed her government’s top aims as the development of an electronic library, contemporary furnishings, friendly relationships between professors and students, and the upkeep of these links with other regional and continental law student organizations.

After the elections, Madam. Budy, the former vice president and current president of LAWSA, urged a united front and reassured her colleagues of her commitment to working together to improve the experience for all students at the institution.

Associate Justice of the Supreme Court of the Republic of Liberia, Her Honor Justice Sie-A-Nyene G. Yuoh, who delivered the keynote address at the inaugural ceremony, explained that effective governance is a call to duty that necessitates a sacrifice of oneself; stating that discipline and a strong will are necessary for the role of leadership and that those who are determined to make a difference will retain their position of leadership. Consequently, she implores the leadership to uphold the standards of the students with regard to the law.

Justice Yuoh hinted, however, that the rule of law and effective governance are rival ideals in the world of hope, never becoming a reality. “One thing has remained undeniable throughout my many years of legal practice, including my time spent at the Liberian Supreme Court: the establishment of a rule of law, a vibrant and independent judiciary, and efficient government are all utopian ideals that will never come to pass,” she said.

She argues that government institutions and agencies are crucial to the advancement of effective governance because real change requires adherence to the law and a transformation of Liberian mentality, while asserting that fostering effective governance transcends the executive, legislative, judicial, every government employee, and every Liberian.

She continued by asserting that the judiciary’s justices must render judgment swiftly, without regard to the party in power, and without fear or favor. She said it entails attorneys acting honorably and kindly by working on moratoria matters rather than filibustering to stall justice.

She went on to encourage the contemporary law students to foster innovation and academicism in the law school environment. It is also suggested that professors standardize their methods and assign grades based on performance, while at the same time encouraging students to retake classes with pride and dignity if they do poorly because this is the start of effective government.

Justice Yuoh went on to say that effective governance aims to reduce corruption, consider the opinions of minorities, and pay close attention to the voices of the most vulnerable when making decisions.

The Associate Justice also exhorted the leadership to be proactive in meeting the demands of society—both now and in the future—and to generate outcomes that do so while making the greatest possible use of its natural resources.

She also urged the law students to keep in mind that the judiciary plays a significant role in the advancement of good governance because it relies on the laws and policies put forth by the legislature and executive to determine rights and because it acts as a check on the laws and the constitutional provisions through the power of judicial review.