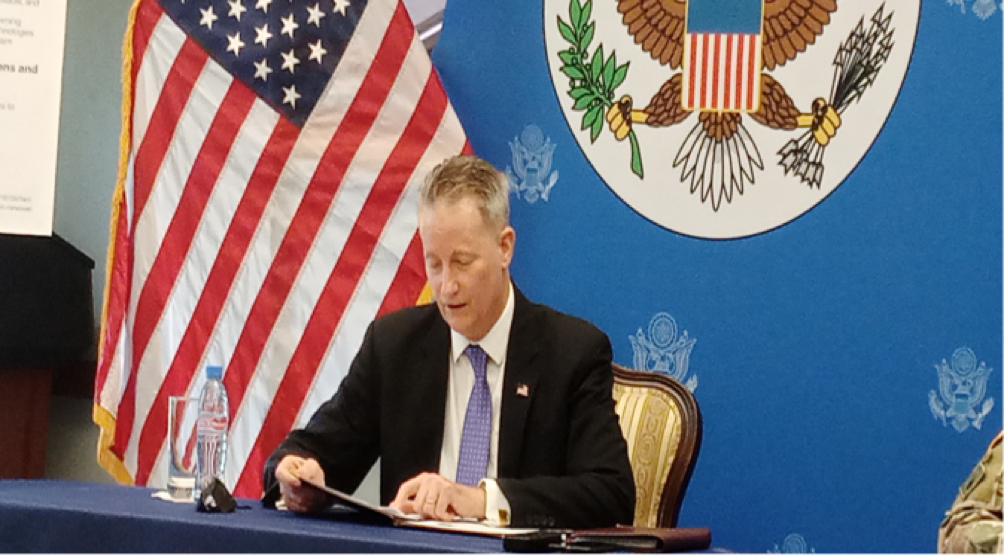 The United States Ambassador to Liberia, Michael A. McCarthy, has challenged Liberians to raise their voices through the ballot box against corruption by rejecting sanctioned government officials.

The US ambassador said the 2023 elections will be the turn of the people to let their voices be heard against corruption.

“In the upcoming 2023 elections, however, it will be the turn of the people of Liberia to let their voices be heard on this topic, especially since several of those sanctioned officials may be running for office,” Ambassador McCarthy said in open letter to Liberians.

He said, it is Liberians and not the U.S. government that are responsible for ensuring good governance in Liberia. The US diplomat noted that sanctions can help, but the ballot box is a far more important tool for holding officials accountable, stating that, “If Liberians choose to elect or re-elect sanctioned officials as their leaders, that will send a very clear signal about how they truly feel about the fight against corruption and the future of their country”.

He reminded that nine months ago, he asked the purposefully provocative question, “What would J.J. Roberts have to say about Liberia today?” which helped spark a conversation about where this country finds itself 175 years after independence and 200 years since the arrival of American settlers.

The US senior diplomat said he believes that on December 9, International Anti-Corruption Day, and at the close of the bicentennial year, Liberians would take another honest look in the mirror.

“Even though we are announcing no new U.S. sanctions here today, I want to assure the Liberian people that our anti-corruption efforts remain robust and continuous. As the Global Magnitsky sanctions of three Liberian officials in August demonstrated, the U.S. government can and will employ sanctions as needed on an ongoing basis in support of our shared development, democracy, and security goals, guided by the U.S. Strategy on Countering Corruption”.

The embassy however warned that the all-important goal of transparent, free, credible, and peaceful elections in October would be an important factor in decisions about additional sanctions in the months leading up to the vote.

“Global Magnitsky, or GloMag, sanctions are deservedly a hot topic in Liberia. Some Liberians have urged the United States to implement more sanctions and even proposed names; others have objected that the sanctions process lacks due process,” he said.

Ambassador clarified that GloMag is a tool the United States uses to protect itself from particularly corrupt actors, not a punishment against a country or government. “It is also in no way a substitute for a domestic judicial process in the host country, including prosecution. Ultimately, “due process” or an accused’s “day in court” can only happen under Liberian law, in Liberian courts”.

Liberians generally agree with our analysis that corruption is the primary cause of Liberia’s failure to thrive, according to McCarthy, and most in the international community share that assessment.

He said that is why US Department of the Treasury took the extraordinary step of sanctioning five senior Liberian officials in only three years under GloMag.

“This set of sanctions has led to some positive results, including the resignation of the three most recently sanctioned officials. In our GloMag sanction announcements, Liberians have heard unusually stark language from the government of the United States regarding the corruption of these individuals. In some cases, Liberians have also heard responses from the sanctioned officials themselves”.

“As I’ve said many times before, corruption is not a uniquely Liberian problem—it is a global issue, and one that we suffer from in the United States at all levels of government. However, today, on International Anti-Corruption Day, it is worth considering what more Liberians can do to fight this scourge. I believe there are many urgent steps the government of Liberia can take now to fight corruption that require no international assistance, many of which are in fact already enshrined in law”.

Amb. McCarthy is calling for the funding of Liberia’s integrity institutions, publishing the names of public officials who fail to comply with asset declarations, making information on all legislative votes and actions easily accessible to the public, and reducing funding for government agencies that do not comply with annual financial reporting requirements.

He said, “On today of all days, we must together acknowledge that corruption in Liberia can be immediately and dramatically curtailed by Liberians, without any assistance from the United States or other donors, if that is something the government and people of Liberia truly want. Where there’s a will, there’s a way! I commend all Liberians who are truly committed to this noble effort”.