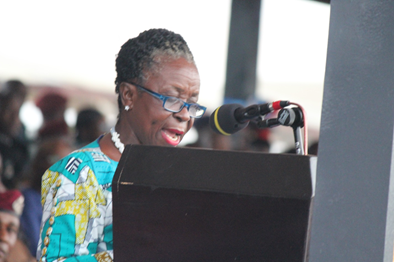 Nicknamed “General’ Broh”, the 2021 Armed Forces day Orator got off with her oration with the recitation of oath of the Liberian military, noting that women in the AFL continue to uphold the spirit of love and passion for the army, like their male counterparts, stressing the need to improve their capacities to enable them assume top leadership roles in the force.

“When we look at the role of women in Liberia and look at the statistic, we need to step up the representation of women in the AFL. When we think of what women endured from childbirth to motherhood, we see that women are just as strong in spirit, just as men,” Madam Broh asserted.

“General Broh” informed her audience at the Barclay Training Center (BTC) Military Barracks in central Monrovia that women who continue to offer sacrifices in different sectors, continue to be subjected to discrimination and other negative vices.

“They have sacrificed in liberation struggles and are now offering unique skills in peacekeeping operations and their contributions have come at a cost. Despite making representation across the continent, females continue to fight discrimination at all levels of service,” she emphasized, adding, “When conflict subsides, military women often receive less award and other recognitions by their male counterparts.”

She spoke on the theme: “Strategies to Incorporate More Females in the Security Sector, AFL in Perspective,” indicating that preconceptions about women’s role and ability in leadership has not prevented them from taking up the challenge to serve in top ranks of their country’s army.

Madam Broh, therefore, maintained that the Government of Liberia creates the enabling environment to retain women and improve their opportunities in the hierarchy of the military.

The 64th Armed forces Day Orator is of the belief that one way to improve the women’s opportunities in the country’s military is by incorporating a sizable number of them into peacekeeping missions.

She called on AFL Chief of Staff, Major General Prince C. Johnson to ensure that women are not subject to harassment in the military, stressing that their numerical strength is rather augmented in leadership roles.

She then made the call for the the Reserved Officer Training Corps (ROTC) to be reactivated and used by the AFL to recruit more women into the army.

She pleaded with Commander-In-Chief President George Weah to join her in making a case for more women enlistment into the military, saying,  “President George Mannah Weah, today, I ask you to join your voice to mine, to call on all women of Liberia to volunteer their services to help every sector of our nation.”

“General Broh” cautioned Liberians to remain supportive of the sacrifices the AFL continues to make in protecting the country.

“Today, we have gathered to celebrate the 63rd  edition of the Armed Forces Day of Liberia; some people out there will be wondering why we should celebrate, when the country is faced with serious economic challenges. Despite the challenges, we must always remember and honor the gallant men and women of the AFL, who have made and continue to make enormous sacrifices to ensure the protection of our territorial integrity and sovereignty of Liberia,” “General Broh” said.

She then expressed gladness over what she referred to as “The level of intelligence and discipline being demonstrated by the Armed Forces of Liberia over the years.”