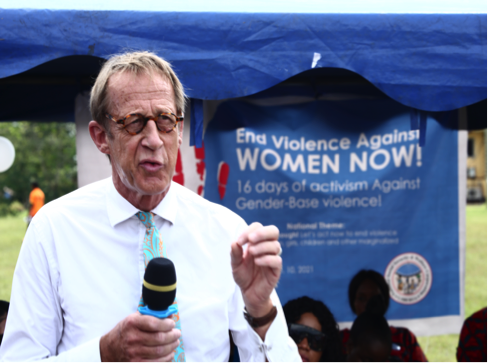 United Nations’ Resident Coordinator for Liberia, Mr. Niels Scott, has noted the need for more work to be done in eliminating all forms of violence and harmful practices against women in Liberia. The UN Envoy noted that in spite of effort made through programmes such as the European Union, United Nations and Government of Liberia Spotlight Initiative, and the sexual and gender based violence program previously funded by the Embassy of Sweden, more effort is still needed in ending gender based violence in Liberia. Mr. Scott spoke recently at the official launch ceremony for the 16 days campaign held in Margibi County, Liberia.

Mr. Scott cited statistics from the Ministry of Gender, Children and Social Protection, which show that cases of gender-based violence increased alarmingly in 2020 with more than 2240 cases being reported.

“There is need for us to collectively and individually contribute to ending gender-based violence and bring the number of cases down,” says Mr. Scott. “There is need to strengthen primary prevention efforts and redefine power relations that have often put women and girls in a vulnerable situation at family, community, and institutional levels,” he says.

Mr. Niels recommitted the United Nations’ efforts to support the Government of Liberia in the fight against gender-based violence. He emphasized that the United Nations would continue to provide support and work with partners to end all forms of violence in Liberia.

The keynote speaker, Honourable, Mawine Diggs, Minister of Commerce and Industry delivered a powerful speech and challenged everyone to question themselves what they have done to fight this societal plague at the individual level.

“I call upon all Liberians and foreigners in Liberia to end violence now. “We must work together and end gender-based violence now. Issues of violence can no longer be handled the family way…Victims must be heard, and perpetrators must be held accountable, she said.

The Ambassador of Sweden to Liberia, Urban Sjöström who spoke on behalf of the embassies of the United Kingdom, Ireland, Germany, France, Sweden and the European Union; urged the government to fulfill all commitments made including scaling up survivor center, comprehensive response to gender-based violence that includes prevention, psychosocial support for survivors, medical assistance, access to justice and rehabilitation programs for survivors, among other things.

Other speakers included Honourable Hassan Karney the Acting Minister of Gender, Children and Social Protection who highlighted that stopping violence starts with believing survivors. He emphasized the need to end all forms violence against women and girls now.

The United Nations joined the Government and people of Liberia to commemorate the 16 Days of Activism Against Gender-Based Violence which kicked off on 25 November, the International Day for the Elimination of Violence against Women, and will run until 10 December, Human Rights Day.

The United Nations in Liberia is supporting the Ministry of Gender, Children and Social Protection to host a series of events that have been lined up to commemorate the 16 days of Activism campaign

The global theme for this year’s campaign is “Orange the World: End Violence against Women Now!” The national theme is, “Enough is enough; Let’s act now to end violence against women, girls, children and other marginalized groups.”