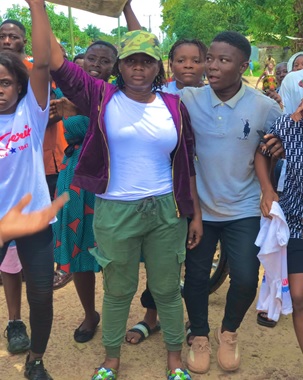 Monrovia, Liberia, October 24, 2022: It’s clear that women are working hard to make a real place for themselves, and if the records are to be believed, Benica S. Elliott’s name stands out as a wise one, as she described her election to the FLY presidency as a new day of accountability in the Federation.

Benica S. Elliot was elected and named the first female president of the Federation of Liberian Youths on Saturday, October 22, 2022, when hundreds of young people from all over Liberia gathered in Buchanan, Grand Bassa County, to vote on a new set of officers. This was a clear example of how hard it is for women to break down barriers and break through ceilings.

She defeated Mau Maiwo Flomo in the presidential election by a narrow margin of 16: 198 votes 214.

Upon being declared the winner, Benica characterized the victory as a political win for women and a sign that the Federation of Liberian Youths (FLY) is moving toward being more open.

She thanked the young people from all over the country for letting her lead them at the time, and she promised them that she would do her best with unity and togetherness.

On the other hand, Benica’s major contender, Mau F. Maiwo, frowned at the process, noting that it was a fraud and irregular.

He said, as far as he’s concerned, he doesn’t recognize any leadership of the Federation until an issue is raised by delegates from the four counties are addressed.

Mau F. Maiwo said it was unfortunate that the Ministry of Youths and Sports gave permission for the election to happen. He also said it was bad for democracy.

Before she became President of the Federation, Benica S. Elliot said that her decision to lead the youth group was based on her desire to serve and, by extension, to kill the idea that women can’t serve in certain positions and have a unique impact on our society.

Benica pointed out the following problems with the Federation that she wants to fix: the institution doesn’t do anything new or different to help with youth issues; there are no traditional programs that help with or address youth issues; youth structures across the country aren’t doing anything; people inside aren’t motivated; the institution doesn’t have a national brand or image; staff capacity development is low across all structures; and the budget isn’t very good.

She emphasized the thematic areas she envisions tackling. She talked a lot about youth empowerment and being able to get a job. She thinks this will help lower the high rates of unemployment, crime, and drug use.

She claims that it will empower youth to take charge of their futures and create young change agents through real-world impact.

She claims that it will empower youth to take charge of their futures and create young change agents through real-world impact.

Benica promised, among other things, to push for a law that would require all senior high school students to take technical vocational education in order to graduate or get into college.

Also on her agenda is to introduce or enforce a decentralized national youth and student internship program in public and private sectors (volunteerism) as well as initiate a FLY scholarship fund drive to increase students’ access to international opportunities.

She said she would work through MYS to get the government to help reactivate and grow the marathon and cycling associations in Asia, which would help youth development.

She put a lot of emphasis on youth programs and innovations and said that they would help close the gap, speed up young people’s access to opportunities, strengthen their sense of who they are, and help them learn personal and social skills.

She bagged a Bachelor of Arts Degree in Economics in 2019 and has since pursued professional and advanced certificates in institutional development, program planning, and advocacy, among others. She is proud to be a Peace Mediator, Youth Developer, SGBV Advocate, Change Agent, Community Organizer, Trailblazer, and team player.

She is a campaigner for sustainable change and believes in transformational leadership, just and equal representation, and contemporary policies focused on youth and gender development. As one of the most important activists for women and children, she has led and facilitated major community-based projects that aim to keep the community safe and give everyone a bigger, safer space.

The Federation of Liberia Youth is the umbrella organization for all youth institutions in Liberia. FLY was established by an Act of Legislation in January, 1974.

The Federation of Liberia Youth is the umbrella organization for all youth institutions in Liberia. FLY was established by an Act of Legislation in January, 1974.