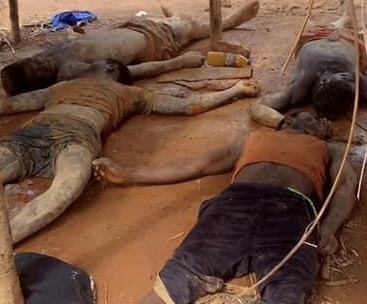 At least four miners are feared dead in Bong County after a mudslide killing all four.

Accordinf to Residents of David Dean’s Gold Mining Camp early Saturday Morning shockingly woke up to the tragic news of the death of four artisanal miners in the area.

The camp according to reports is densely populated due to the regular including active commercial activities especially at the mining site which is one of the main sources of livelihood for the locals.

According to reports the four local miners met their untimely deaths following a mudslide incident on December 12,2020.

The lifeless bodies of the deceased were discovered in Kokoya Statutory District, Bong County in Central Liberia under a little hut.

The Reports also suggest that the deceased were on their usual mining site carrying on their regular operations when they met their demise.

The lifeless bodies photo also depicts that the four guys battle for life before death but had no rescue neither option but to give up the ghost after the gigantic mudslide over power and killed them instantly.

According to residents the situation publicly is the first of its kind at the David Dean’s Gold mining site but scores of similar incidents had previously happened but had not been widely reported unlike now.

Mudslides is of common place especially at mining sites including wet land areas mainly during the rainy season in Liberia.

It can be recalled that that mudslide incident few years ago hit some parts of Nimba County and led to the deaths of several people.