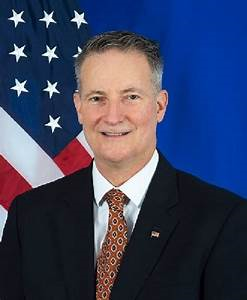 The American Ambassador accredited near Monrovia, Michael McCarthy has highlighted education as an indispensable tool for women and girls in the fight against gender inequality, sexual and gender-based violence across the globe.

The US diplomat emphasized that education can be used as “a game changer for women and girls” in the pursuit of social, economic, and political authority.

Speaking at the commemoration of the International Women’s Day at the Ministerial Complex in Congo Town, outside Monrovia, the American diplomat maintained that education can be used by women and girls throughout the universe to end the scourge of inter-generational poverty.

However, McCarthy lamented that perhaps there is no greater impediment to achieving gender equality than “a deeply rooted cultural system that favors the education of men and boys over the education of women and girls.”

McCarthy indicated that women with some level of education enjoy some increase in agricultural productivity and income than their uneducated counterparts who are just likely to be victims of sexual and gender-based violence.

He stated that holding to the fact that education has proven to be one of the most powerful tools that can foster change in the world the United States has attached special importance to educating women and girls.

“Our current emphasis is on increasing access to education for early school children and adolescent girls between the ages of 8 to 15, providing them a safe and quality learning environment where they can acquire basic literacy and numeracy skills and ultimately transition into formal school,” McCarthy said.

He recalled the commencement of the celebration of the Day, stating: “The road has come a long way, since the first day of International Women’s Day was celebrated exactly 120 years today.

He stressed that over those 120 years, the celebration of the International Women’s Day has served as an undeniable truth that respect for women’s rights should not and does not come at the expense of men’s rights.

McCarthy pointed out that everyone, including men and boys, has a role to play in the fight for gender equity, and achieving gender balance means more than simply expressing ideas of equal treatment of people under the law.

The American emissary asserted that the idea about the celebration of the Day is also about how communities, societies and countries can prosper and benefit by fully tapping on the energy and talents of all their peoples, including women, girls, men and boys.

He urged the public to do everything possible to ensure that issues confronting the growth and development of women and girls are addressed for the betterment of the world.

“As we celebrate International Women’s Day today, let us therefore recommit ourselves to doing all we can to get Liberian women and girls equal access to the rights and privileges enjoyed by men and boys” the American diplomat said.

He cited that affording equal access to the rights enjoyed by men and women will help unlock doors of opportunities that have been shut to them for so long, thus making them active players in Liberia’s journey to self-reliance.

He assured Liberians of America’s support in the quest to provide a level playing field for women and girls as well as men and women.

“Rest assured that as we work together to do so you can count on the continuous support of the United States,” McCarthy pointed out.

International Women’s Day (IWD) grew out of the labor movement to become a recognized annual event by the United Nations (UN) which goes a s far back as 1908 when 15,000 women marched through New York City demanding shorter working hours, better pay, and the right to vote.

This year’s celebration was held under a global theme “Women in Leadership: Achieving an Equal Future in a COVID-19 World,” which was further narrowed into the National theme: “Breaking Down Barriers in the New Dispensation of a COVID-19 World.”

IWD is celebrated annually on March 8, and is set aside globally to recognize and celebrate the achievements of women and girls, regardless of political alignment, nationality, economic disparities, cultural, lingual or religious backgrounds.

“Our souls must ache with urgency”