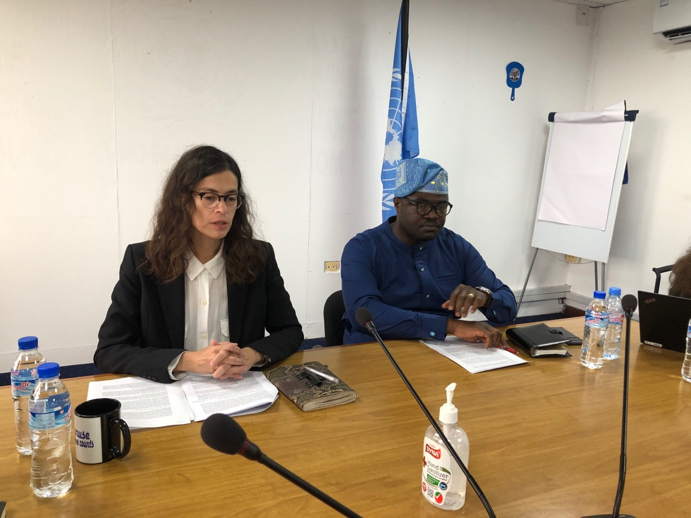 Members of the United Nations Working Group on Business and Human Rights are calling on the government of Liberia and businesses operating in the country to urgently implement measures to ensure the quest for economic development does not continue to undermine human rights.

The call was made by the UN Experts on Friday, November 11, 2022, at a press conference presenting a statement at the end of a 10-day visit, held at the One UN House on 1st Street South.

The Working Group’s delegation went on a country visit to Liberia from October 31 to November 11, 2022. The purpose of their visit was to assess how the government of Liberia and the business sector discharge their respective duties and responsibilities under the UN Guiding Principles on Business and Human Rights (UNGPs) to prevent, mitigate, and remedy human rights abuses and negative impacts linked to business activity.

In a statement, the chairperson of the working group, Fernanda Hopenhaym, said the group is thankful to the government of Liberia for inviting them to visit the country and for facilitating the conversation they had with government representatives.

Hopenhaym stated that during their visit, they met with various stakeholders in various parts of the country, and they also visited Nimba, Bong, and Bomi Counties, where they held a series of meetings, including one in Monrovia.

She disclosed that they were able to collect as much information as possible and get the fullest picture in a short period of time and were able to gather preliminary findings on some of the challenges they saw.

According to the UN expert, the current climate of irresponsible business practices benefits corporations but does little for people; therefore, a sustainable and stable peace requires accountability, transparency, equality, social cohesion, the rule of law, and the respect of human rights for all.

She welcomed the government of Liberia’s commitment to implement the UN Guiding Principles on Business and Human Rights (UNGPs) and praised the development of a national action plan on business and human rights.

Hopenhaym emphasized that it is evident that many challenges are being faced in Liberia, and they are fully aware of the background and context after the civil war and the efforts that have been made to address some of those challenges.

“We understand that there has been progressed in terms of laws that have been passed, like the Land Rights Act of 2018 and the Decent Work Act of 2015, but we are highly concerned by the situation of human rights in the country in the context of business activities.” “Business plays an important role in promoting sustainable peace and the implementation of the guiding principles,” she said.

She emphasized the importance of the government attracting investment in order to diversify the country’s range of sectors, adding that “to increase job opportunities is very important, and we also note that to increase the interest by foreign investment to come and create job opportunities in the country in tile addressing human rights and environmental consideration so that this creates an enabling environment that is conducive to responsible business instead of opportunistic business.”

She further stated that the Working Group noticed that actual and perceived corruption and weak public institutions failed to inspire trust in state authorities and created a social conflict that harmed all stakeholders.

She stated that the Working Group was extremely concerned about the overall human rights situation in the country, particularly in key economic sectors such as mining and agribusiness concessions.

Hopenhaym went on to say that during their visit, they encountered a widespread allegation of rape and sexual harassment against women in the workplace at an alarming level, as well as some instances of child labor, despite the many efforts to eradicate child labor that they are aware of, which have decreased but there is still work to be done.

She stated that they have also seen a lack of opportunities in the labor market for people with disabilities and that the delay in salary payment in both the private and public sectors is extremely concerning.

Hopenhaym noted that they observed extremely low wages, inhumane working conditions that may amount to modern slavery in some areas, abuse and intimidation of labor union leaders, and retaliation, which is common practice for people who speak out when they encounter corporate abuse.

She narrated that environmental pollution is another thing they observed and that it is of high concern and that communities are in depressed desperation with business operations; there is a lot of dismay and vulnerability in communities in concession areas, and there is a lack of access to land. Despite the fact that customary land rights have been recognized in the law since 2018, there are still many challenges for local communities to have land and food security with very little land for farming, so that livelihood is very limited for communities in concession areas, and this is a huge concern to the working group.

We think the role of businesses in securing sustainable peace is very important, and we hope that business operations start to develop in a more responsible way, respecting rights and providing actual development and benefits for the people on the ground, which is really limited to the extent of what we saw during our visit.

Also speaking, a member of the working group, Damilola Olawuyi, indicated that, on a positive note, they welcome the willingness of the government to develop a National Action Plan (NAP) on business and human rights.

While different parts of government have been involved in prior discussions on some of the NAP process, and there appears to be a clear lack of communication between ministries on the NAP as such, Olawuyi believes the first step is to increase awareness on the NAP and involve as many stakeholders as possible through multi-stakeholder engagement, which is a precondition to achieving a successful NAP.

He recommended the Working Group’s NAP guidance to the GOL, saying it was very important that the NAP be developed in a transparent and inclusive manner.

Olawuyi also stressed the need for policy coherence and to ensure that the topic of business and human rights, which is clearly a cross-cutting topic, is implemented in a coherence and holistic manner, including issues relating to labor abuse, discrimination, environmental damage, forced eviction and land rights violations, and intimidation of human rights defenders. These are all cross-cutting topics, and they think that relevant state ministries and agencies should come together to shape business practice in these areas.

He hoped that high-level political support and commitment from the leadership on implementing the UNGPs, together with the meaningful participation of all relevant key stakeholders, were essential and would be prioritized.

He also emphasized that it is also important for the government of Liberia to develop and present a strong and united front in the face of the multiple business practices that are clearly not right and have little incentive to do better.

However, the Working Group’s preliminary findings on human rights and meaningful participation of communities in decision-making processes disclosed that, despite provisions in laws and regulations and commitments made by companies, communities living in areas where mining and agri-business concessions are operating reported that they experienced no meaningful participation.

The group’s findings state that, according to communities in Nimba, Bong, and Bomi counties, there have not been consultations about the projects operating on their land, nor have there been clear mechanisms for participating in decisions pertaining to the development of their communities.

The group recommended the strengthening of the capacity of institutions responsible for implementing consultations with communities, including by providing the necessary funds for relevant public servants to discharge their duty.

The group highlighted that there is much to be done to implement the UNGPs, starting with raising awareness of their existence and the respective duties and responsibilities of the government and the business sector.

According to them, Liberia needs to take strong and timely steps to create an enabling environment for responsible business, and it should set an expectation that businesses respect people and the environment, and that this is a precondition to doing business. And there needs to be a genuine wish to improve corporate respect for human rights and a vast amount of action, not least because respect for human rights is also good for business and for attracting investment from responsible businesses that any country at any stage of development would want to host.