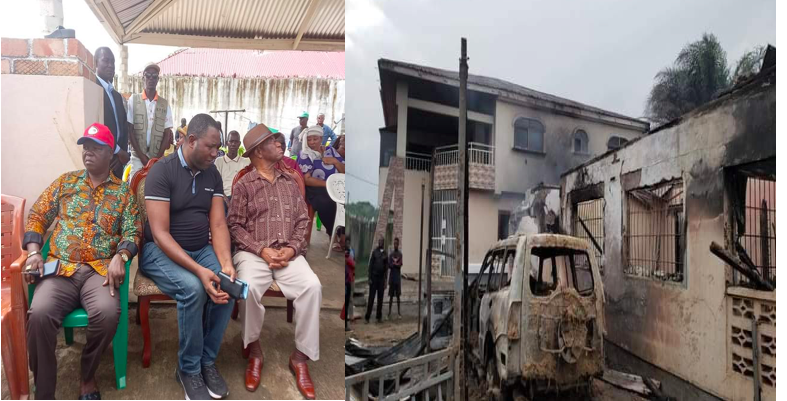 “In light of the government’s deliberate actions against opposition leaders, journalists, student activists, and innocent citizens, Unity Party will not accept any findings which is not a product of investigation done by an independent forensic investigative panel in the burning down of its Chairman home during the early hours of August 12, 2022”.

UP said days after armed men thought to be operatives of the ruling Coalition for Democratic Change followed the car of the Chairman and party executives to determine the locations of their residences, it was reported that government-hired arsonists destroyed the Unity Party Chairman’s home.

Unity Party said it was devastated to learn that Rev. Luther Tarpeh’s Paynesville home had been the target of a well-organized attack on Thursday morning about 1:00 am.

“In the early hours of August 12, 2022, the attackers, who are thought to be agents of the Liberian government, threw a number of petro-bombs through Chairman Luther Tarpeh’s fence, which is thought to have started the fire. One of the homes and a Mitsubishi SUV in the fence were both completely destroyed by the arson”.

The Party said the treatment for a severe burn is currently being provided to one of Chairman Tarpeh’s sons. So far, all other family members are secure.

UP is in the process of formally complaining about the attacks made on its leaders by members of the ruling party, according to a release.

According to the Party, the opposition leaders and critical voices in the country are routinely harassed, denigrated, and, in rare cases, found dead with no charges filed by the government, bringing back painful memories of Liberia’s dark days, which the Unity Party feared have significantly regressed under the CDC-led administration.

“The Unity Party wants to reiterate that it will not tolerate unjustified and senseless attacks against its leaders, partisans, and the people of Liberia as we advance to the 2023 legislative and presidential elections, even though the party urges its supporters and the general public to maintain their composure as additional investigations are carried out”.

However, the Unity Party has urged all of its members, supporters, and Liberians in general to exercise caution and restraint because the party is dedicated to giving all Liberians a responsible, peaceful, and democratic government.

Meanwhile, the government of Liberia has described the accession as creeping and unwarranted acts of provocation and bellicose political maneuverings will not distract the government from the course of development meant to improve the livelihood of ordinary Liberians.

“These creeping and unwarranted acts of provocation and bellicose political maneuverings will not distract the government from the course of development meant to improve the livelihood of ordinary Liberians,” the statement said.

According to the government, it is only interested in solidifying the country’s peace and building upon its democratic gains and therefore calls on all political parties, their cohorts, and supporters to join in this national endeavor.

The Chairman of the opposition Unity Party (UP), Rev. Luther Tarpeh home was mysteriously gutted by fire on Friday, August 12, 2022.

Investigators from the National Fire Service have already been dispatched to the scene in order to determine the cause of the outbreak.

However, the government is deeply troubled by allegations contained in a press release from the UP alleging that the government sponsored the incident. The party in the release said the government hired thugs to commit arson.

Information Minister Ledgerhood Julius Rennie calls the claim unfair and irresponsible, bearing no element of truth.  He said the Administration of President George M. Weah is not in the business of physically attacking its political opponents. “What do we stand to benefit from the action”, the Minister retorted.

He said President George M. Weah is a man of peace who ascribes to the democratic process, respect for human rights and the rule of law; and is running a responsible government that does not engage in acts of gangsterism.

The government, the Minister said, empathizes with the victim, Rev. Tarpeh, who himself told journalists that he does not yet fully understand what led to the fire outbreak. However, contrary to the UP Chairman’s statement, its Secretary General, Amos Tweh, had already sweepingly accused the government of committing the unfortunate act even before the arrival on the scene of investigators from the Liberia National Fire Service and the Liberia National Police. Tweh’s remarks were disappointingly contained in the party’s release.

The government wishes to emphasize that it has an internationally acclaimed democratic record, while also being led by an icon of peace, and will do nothing to taint its reputation. It’s high time political actors refrain from incendiary rhetoric that could undermine the country’s hard-earned peace, as we move to General and Presidential elections next year.

In recent years the government has been engaged in efforts to augment the capacity of the Liberia National Fire Service as it grapples with frequent fire disasters around the country, which have been caused by a myriad of reasons. The government, therefore, urges the Tarpeh family and the Unity Party to remain calm while authorities determine the actual cause of Friday’s fire.

Unity Party in another statement said it rejects Government of Liberia attempt to smokescreen its hired arson attack on the properties of Chairman Luther Tarpeh, emphasize it may only consider as credible, reports from an independent forensic investigation panel.

The Party said it read with laughter statement from the Ministry of Information in which it expressed that “the government is deeply troubled by allegations contained in a press release from the UP alleging that the government sponsored the incident at the home of its Chairman. The party in the release said the government hired thugs to commit arson.”

“Unity Party is aware of the CDC government smokescreen strategy to announce investigations that have led to a number of inconclusive, or “no foul play” outcomes”.

UP said it is aware of the government’s vehement denial in the claim that the arson attack on the properties of its Chairman was carried out by operatives of the CDC, as such; the outcome of the so called investigation by government own institutions will be meant to validate its denial.  According to UP, it remains committed to peace but is equally prepared to take all necessary actions to protect the rights, dignity and lives of her partisans and the Liberian people.