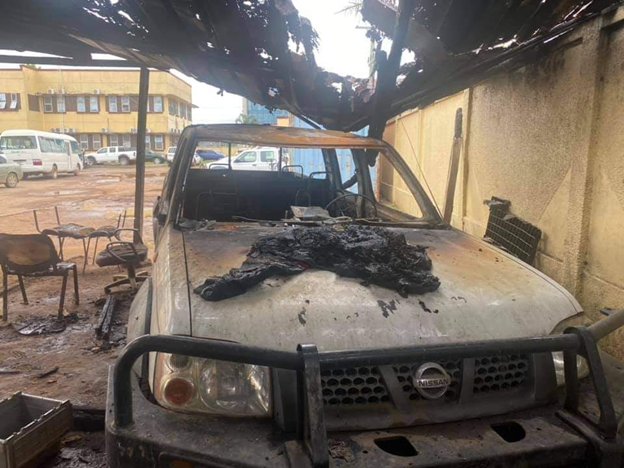 MONROVIA – The National Elections Commission (NEC) has disclosed that its 9th Street Headquarters was bombed by unknown persons during the evening hours of Monday, 15 March 2021.

The NEC in a press release issued Tuesday says unknown persons threw petrol bombs on the compound of the Commission’s Headquarters; setting ablaze a double cabin pickup, marked LB-6868 and the zinc roof of the NEC’s garage.

The Commission estimates the cost of the damages incurred as a result of the arson attack, at US$45,000.

The NEC says it strongly condemns the arson attack on its 9th Street premises, late Monday night at about 10:30 PM, adding that preliminary investigation has proven that additional unexploded petrol bombs were found near the NEC fence on the 10th Street side.

“The National Elections Commission is supporting the Liberian National Police’ investigation into the arson attack on the premises of the NEC Headquarters in the hope perpetrators will be found and brought to justice,” the NEC noted in its Tuesday’s press release.

Meanwhile, authorities of the Liberia National Police have informed the Elections Commission that security will be beefed up at the compound of the electoral body.