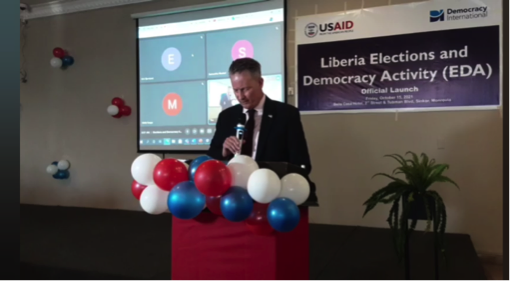 Amidst numerous calls by Liberians for the reintroduction of civics in primary and secondary Schools in Liberia, US Ambassador Extraordinary and Plenipotentiary accredited to Liberia, Amb. Michael A. McCarthy has also added his voice to said call.

According to Ambassador McCarthy, USAID and Democracy International will be working with the Ministry of Education to reintroduce civic education into curriculum of primary schools in the country.

He made these assertions at the official launch of Elections and Democracy Activity (EDA) program, a United States Embassy program, sponsored through USAID and Democracy International, held on October 15, 2021 at a local hotel in Monrovia.

Amb. McCarthy said it is important because nurturing Liberia’s leaders of tomorrow depends on their understanding of the roles and responsibilities of citizens and elected officials.

The US envoy noted that a strong democracy provides its people more than just the right to vote in election, but that democracy leads to greater economic growth than the alternative, and that the quality of democracy can improve the inclusiveness of that growth and deliver better outcome and better public services to all the people including the poor of a country.

Speaking further at the USAID and Democracy International sponsored program, Amb. McCarthy lamented that Liberia’s recent history teaches us too well to the function of any true democracy.

He intoned that as critical as they are to a stable democracy, free and fair elections alone do not make a democracy unless the active participation of all members of society, including women, youth and marginalized populations, a free press, and an independent judiciary.

The US Ambassador indicated that the EDA program is a 16 million dollar investment in Liberia from the American people paid for with US taxpayers’ dollars and demonstrating the continued spirit of partnership between the two countries.

He used the occasion to congratulate the Liberians and the National Elections Commission for another in a series of successful election cycle.

For his part, the Mission Director of USAID/ Liberia, Mr. Jim Wright, indicated that the Election and Democracy Activity (EDA) program launch will help Liberia consolidate those gains and succeed in strengthening its democratic order and build on previous USAID support to the National Elections Commission.

According to Mr. Wright, the new program will also support the political participation of women and youth and will do so through candidate and leadership training, as well as skills building for female legislators.

In addition, Mr. Wright narrated that the EDA program will plant the seeds for young students to learn about their fundamental rights and responsibilities.