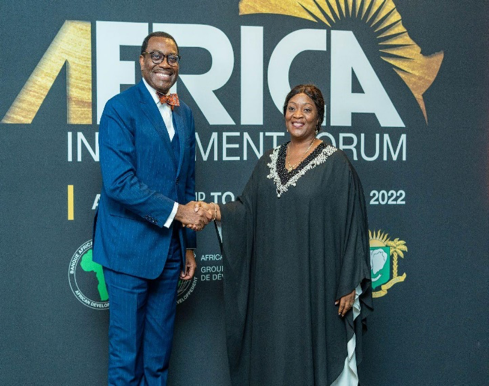 A number of African heads of state and government took part in the event that was staged in Abidjan, the commercial capital of Ivory Coast, from November 2nd to November 5th, 2022. The event lasted for a total of three days. The leaders of Africa presided over meetings of potential investors and led business transactions with them.

Tiémoko Meyliet Koné, Vice President of Côte d’Ivoire, was one of those individuals. He filled in for President Alassane Ouattara during the event.

The event reportedly attracted $31 billion in investor interest in supporting various investment opportunities on the African continent. This information was conveyed in a dispatch.

During the event, Vice President Jewel Howard-Taylor mesmerized the audience with her brilliant ideas on Africa’s governance, investments, agriculture, gender, development, and youth issues. Her performance was nothing short of remarkable, according to a dispatch form Abidjan.

Liberia’s Vice President held bilateral meetings with the Presidents of Ivory Coast and Ghana as well as other distinguished personalities while the event was in progress.

Vice President Taylor sat down with the President of the African Development Bank, Dr. Akinwumi Adesina, to discuss a wide range of concerns pertaining to Liberia’s economic growth with him.

Dr. Adesina gave Vice President Taylor his word that he will continue to stand by the Liberian government and the Liberian people.

Additionally, the President of the ADFDB made a commitment to assist the agricultural sector of Liberia in increasing rice production. This will allow Liberia to achieve food self-sufficiency and food security, in addition to allowing the country to become a net exporter of rice.

He took advantage of the opportunity to express his gratitude to President Weah for his leadership and to extend an invitation to the agriculture summit that will take place in Senegal in January of 2023.

The Vice President, Mrs. Howard-Taylor, then extended greetings on behalf of President Weah and the wonderful people of Liberia, and she pledged the support of the country for the continued success of the bank.

“We don’t trust the police report”